March 04, 2021
I've kept this video on my desktop for a few weeks. I cry whenever I watch it.  Thanks to one of my friends who sent it to me. What an example! Live richly, marilyn
Post a Comment
Read more 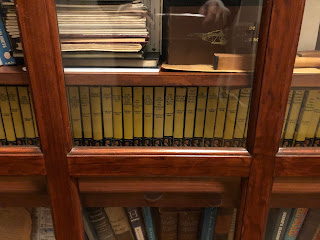 ...and I couldn't get to them, because the glass slider door wouldn't slide open. Thank goodness one of the folks that clean my house was able to open it. Thank you, Andre!   I have my collection of Nancy Drew books in that bookcase.  And there are some other treasures  to us there, as well:  -Carl's dad, Dick Schumacher's, flight logbook. I believe this was the year he died in a Western Airlines crash.  -A barograph that somebody gave us...so I could track how high I flew, when wave-soaring out of Minden, Nv. I believe I got up to 21,000' and was awarded with some type of certificate. Yes, I used oxygen and the tank was locked in behind me. -A sextant that Carl used to:  'determine the angle between the horizon and a celestial body such as the Sun, the Moon, or a star, used in celestial navigation to determine latitude and longitude. The device consists of an arc of a circle, marked off in degrees, and a movable radial arm pivoted at the centre of the circle.&#
Post a Comment
Read more 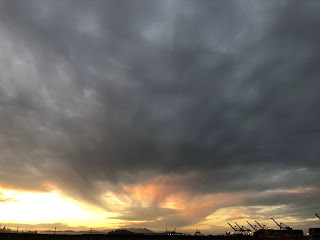 The largest plane that I flew was DC4's, a four-engine airplane, as a co-pilot.  Aero Union was the name of the company. The planes were based out of Chico. The Aero Union folks knew that some of the Sky Sailing pilots had some viable, reliable flying skills.  The salmon haul tool place in Kenai, Alaska  when the sun was up nearly 24 hours per day. The sun just dipped below the horizon and came right back up.  We flew the planes, based on the low-tides, onto the hard-packed sand beaches, then took off to wherever they wanted to have the fish be delivered. Sunset in Alameda, this week Each tote required a forklift to get the goods out of the plane.  And yes, we sometimes pried off the top off one of the totes (which were huge)  so we could have fresh salmon for a meal or three. I don't remember cooking....and I think we took the salmon to a restaurant and had the cook whip up a meal for us. One of the ways I (we) built up my (our) resumes was to deliver new Piper (single-engine
1 comment
Read more 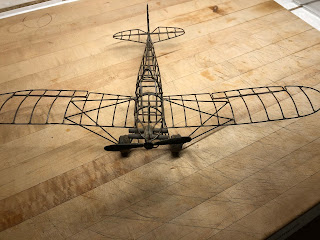 Last week I wrote about flying...and this week I'm going to write a bit more about flying. Wire model of the Flybaby, constructed by Dick Schumacher. I'm continuing the story about how Carl trusted me to fly the Flybaby, a homebuilt plane built by Dick Schumacher (Carl's dad).  Les Arnold (who started Sky Sailing in Fremont) kept the Flybaby in a hanger, at the Paradise Airport. The Flybaby didn't need much space, because the wings would fold next to the fuselage (body) of the plane.  I was newly pregnant with our daughter, Sutter. Carl and I had come to an agreement that I could teach flying and fly the tow planes, as long as I was able to move the stick (which controls the ailerons and the horizontal stabilizer, i.e. the right/left and up/down/motions for the plane) and avoid my belly. We spent the night with the Arnolds. The next morning we drove to the airport. We checked out the plane. And Carl told me I was going to fly it to the north field at Oakland Airport, w
Post a Comment
Read more 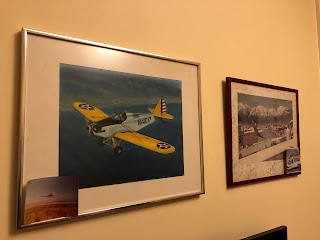 ...and came across Airplane Repo on the Discovery Channel.  So I watched a partial episode. This guy/guys/people were after the high-end (meaning mega $$$$) airplane/jet stuff.  I watch a partial episode of a pilot climbing over a 10' tall fence, in the dark, with a gun, trying not to get caught. Hey, I used to do that! A bunch of us pilots that worked at Sky Sailing Airport (in Fremont, CA) teaching glider flying and flying the tow planes, getting hours worth of flying in and being paid for it was worth it. It wasn't very much $$ in those days. But we did it because we needed to accumulate hours.  I also taught a ground school class, that's required for FAA certification prior to the flight test. The class would be held at a local Denny's restaurant, or in the cold hanger at the airfield.  Actually, I was a Designated Pilot Examiner (appointed by the local FAA office @ Oakland Airport) so I could also test the skills of the want-to-fly-gliders pilots. If they passed
Post a Comment
Read more 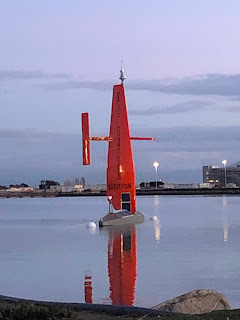 I was driving around the base one evening this week (aka the former Alameda Naval Air Station) and it was pretty still and quiet. Then I saw this boat/hardware-thingy with a bright orange sail/mast with a wind direction/pointer/balancer. What is this? I took some photos.  Then the next day I received my weekly Alameda Sun newspaper, and there was my answer.  From the Alameda Sun -  "Alameda-based Saildrone, launched its new vessel 'Surveyor' in Seaplane Lagoon, Jan. 11. The 72-foot unmanned vessel will map the ocean floor and complete other studies. Alameda Mayor Marilyn Ezzy Ashcraft attended a small ceremony marking the Surveyor's first time in the water. It was very quiet and still. But shortly thereafter, there were some folks doing donuts and circles in their cars and that was my clue to get outta there.  However, I thought about Carl. He was a Naval Architect/ Yacht Designer and how much he would have loved to see this wonder.  IMHO...he already has. Live richly
Post a Comment
Read more

America seems so much better, as of Wednesday... 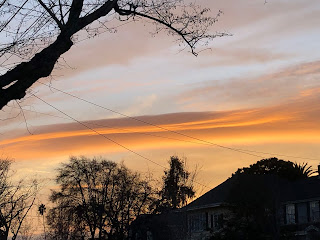 Sunset in front of my house, this past week. ..but there's a lot of work for me to do, and for all of us. I watched the inaugration and I was blown away by our National Youth Poet Laureate, Amanda Gorman.  I have tears in my eyes right now, as I'm reading what she wrote. Her work is amazing and her reading and her gentle hands waving, reminds me of a ballerina. I know most of you watched her read it yesterday. But I wanted to remember it, so I got a copy of what she wrote.  When day comes we ask ourselves,  where can we find light in this never-ending shade? The loss we carry, a sea we must wade We've braved the belly of the beast We've learned that quiet isn't always peace And the norms and notions of what just is Isn’t always just-ice And yet the dawn is ours before we knew it Somehow we do it Somehow we've weathered and witnessed a nation that isn’t broken but simply unfinished We the successors of a country and a time Where a skinny Black girl descended fr
Post a Comment
Read more
More posts