December 17, 2010
I know next to nothing about them.  But they gather religiously nearly every weekday.  They are retired.  But they aren't in church.  They are at a local coffee shop, shooting the breeze, sharing a tons of smiles and some heated conversation.  Of course there are big guffaws over the bad (and probably oft-repeated) jokes. 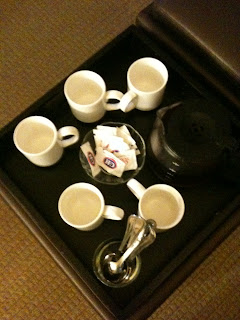 What I like so much about this locale is that it's noisy enough to keep conversations private.  There is a bit of an echo due to the high ceilings.  It's bright with a lovely hand-painted mural.  The room is long and narrow towards the back, not conducive to more than two per table so groups are in the front of the store.  If anybody wants liquor, they need to go elsewhere.
One day I came up with a name for them.  The Men Hens. Some time later I was in line at the shop behind one of the men.  We've recognized each other for a long time.  The gang was there.  I smiled and asked how he was.  He's always upbeat.  I told him I had named their group.  He laughed when he heard it and didn't object.
I recently found out about another Men Hens group in a different part of town.  It turns out I actually know some of those guys. And they are hysterically funny.  Same composition of ages, and a variety of careers.  These dudes meet at a donut shop everyday morning.  They keep an eye out for each other.  If one isn't there, the friendship extends beyond the shop to checking in by phone or in person, but without being invasive.

I don't know if the first group has wives or partners.  I know some of the second group have spouses.  One of them brings her husband to the group!  I'm sure the motivation "get him outta my hair just for awhile!"

The reason I love what I see is because it's a community within a community, within a community.  At a time when 'old' guys can become isolated and hibernate, often only relying on a spouse for any and all needs, this community is keeping people connected.  It's a reason to stay engaged, involved.  And while I am sure they don't let morons at their tables too often, they seem very welcoming to friends of their friends.  But chicks are definitely not with them.
I'm not aware of gossip.  I do see smiles and hear laughter. They may not be solving the worlds' problems but they don't seem to be creating them either. And they don't seem to be rushed.
Now here's the personal part.  My dad, who is still with us, but not very mobile and quite angry about his circumstances, was never social.  He is nice to people and quick witted, but never extended himself beyond my mom, and then after she died, the woman he is married to now.  And yet he has chosen very social life partners!  But his choice to not face up to what he can actually contribute has drowned his wives in his sea of self-pity.
This is a man who retired when he was 49.  He played his way, all day.  He was one of the first surfers at Malibu.  The tennis group he was part for quite some time broke up.  He became more isolated from people, despite the fact that he hung out on his boat, and went rowing most every morning.  He just didn't want to be around people.  Men have reached out to him over the years but he's retreated.
I hope I have learned a lesson from the Men Hens.  It sometimes takes a major effort to get out of the house AND be with people.  But the impact on one's perspective, health, and mental well-being is obvious for both men and women.
Here's to the Men Hens. May many more Men Hens Dens hatch profusely!
Live richly,
marilyn