Who is your Maxine? 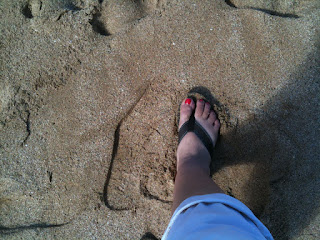 I'm not referring to the Maxine cartoon character, although I totally love those cartoons!

This is about the neighbor lady across the street when we moved to Fullerton when I was 5 years old.  It was my folks first owned-home, a newer small rancher in a tract development, with untouched orange groves at the end of the block.

Maxine was her name.  She was a wonder to me.  She was everything my mom wasn't.  She had short jet-back hair.  She was always super tan.  Her finger nails and toe nails were always painted a bright fire engine red.  She wore stylish pedal-pushers.  I thought she must have been a model.  She was old.  I figured she was in her 20's. AND....she always wore thongs.

No, I don't a thing about her undies....I just know that's what we called those flat rubber-sandal shoes, that everybody else has since called flip-flops for decades.  (Of course the word flip-flop is also used as a political term .)

I also remember calling them go-aheads.  I think the name go-aheads must have come from the fact that the small knobby rubber thing that was wedged into the hole of the sole of the sandal, between the big toe and first toe, would pop out when one least expected it and you'd 'go ahead' until you nearly tripped over the blow-out.

Maxine had a dog but I don't remember her ever walking it.  It was a yapper.  She had a shiny black car.  She loved to stand outside and water her small lawn, waving the water nozzle up and down, up and down.  I never went in her house.  But standing next to her was kind of magical.  She knew my name.  For some reason I had permission to call her by her first name.   I never saw a man at her house or with her.  Just the yappy dog.

Shortly after I'd cross the street to watch her water, my mom would come over, say hello and then bring me back home.  She was mostly busy with my baby brother those days.

I don't know why I've continued to have Maxine in thought.  But as I was working around the roses in the front yard a few months ago, I started thinking about her.  And I wondered if I was somebody's Maxine.

I mentioned this to a friend today.  I asked her if she had a Maxine.  And she said she did!  She was between 5-6 years old when she became aware of her Maxine.  Her Maxine also lived across the street from her.  She was magical, too.  Yet she was very different than my Maxine in most other ways.

Her Maxine didn't have a name...or at least one she could remember now.  She was in her 80's, a small woman, who had a small bird on her front porch.  My friend was amazed by the bird and loved the inside of her Maxine's house.  But what she spoke of most fondly were the qualities of her Maxine.  Her kindness and demeanor, that is what has stuck with her all these years.

So it begs two questions.  Am I somebody's Maxine?  The answer may be too scary to contemplate if the answer is "yes - just like the cartoon!"  I surely don't match any of the physical qualities I remember about my Maxine.  And the second question is 'Who is YOUR Maxine?"