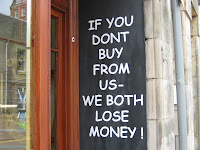 I had to go to Tiffany's.  Not to visit Tiffany, the singer of the olden days.  Whatever happened to her?  Wait, I don't care.  I had to go to a Tiffany & Co. jewelry store.   I didn't want to go to the store in San Francisco.  Too much hassle.  It would be easier to bring the small, non-working, brass Tiffany desk clock that I found in my dad's apartment while clearing it out, to a Tiffany store in southern CA.  It would be an errand on a road trip I had planned.  Being both interested in and intimated by the shopping habits of a very small percentage of the population that is doing its part to put the us back into USA and pull us out of the economic mess we're in, I parked the car and took a deep breath before walking into South Coast Plaza.  It's the mega mall in The OC city of Costa Mesa.  It contains more high-end stores under one roof than I've ever seen.     In the mall...where is that store?  Ah!  There's a security guard coming out of
Post a Comment
Read more
More posts