I love to go to the beach. I love it any time of year.  I especially love it in Maui.  Any where in Maui.  Well, not JAWS.  That's the place where super surfers get towed in by super jet-skis because the surf is so monstrous that they can't catch the waves with out a boat towing them into the heap of water.

These are a couple of photos I took at Jaws.  It broke when I was there about five and a half years ago.....in December.  I had only hoped in my dreams to see it. 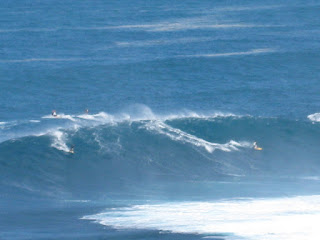 The shot below is my screen saver on my computer.
But I digress.  I want to talk about an afternoon I had one day at Ka'anapali Beach....steps away from the timeshares I have at the Westin.  (I have a mess of them.)

I was sitting.  I often just sit.  I stare at Molokai. I stare at Lanai.  I stare at the water.  I just never get tired of staring.   You'd think I was waiting for them to move, or erupt, or sink.  But they don't.  They are a sight for my imagination. 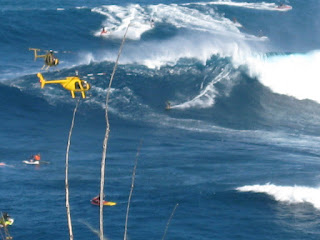 The wind was blowing, the Hawaiian type of  'blow.' The kind that carasses you and wraps you up in its warmth of rays.

And then I realized folks were stepping away from the water.  Going in.  But stepping away.  Hhmm.  I wondered what they were looking at.  Nah, I coudn't be bothered because I was staring at the horizon.  But the people were in my way.  Folks, just move on.  I have things to stare at.


Then I saw it.  It seemed like a large type of jelly fish or some such thing, floating on and below the water.  I was curious so I got up.

Oohh..I wondered if it was one of those things I saw on the Big Island at the small beach at Kona Village a number of years ago when Carl and I celebrated our 18th (?) anniversary there.  We went with another couple and the guys were racing small boats, and Jane was sawing z's and I saw it when I was snorkeling.  It was kind of gross.  I went to the beach hut and we got out the fish guide book and found it.  It was gross.  Kind of blobby.

Yes, I had just caught a large.... table cloth.  The kind that caterers set up on their tables for weddings.  And I bet it blew into the ocean.  Maybe it had come from Molokai or Lanai.  Or maybe not.  I waved it to the people who were standing on the sand, admiring me for my bravery (or so I thought).

I took it to the condo, gave it a decent wash and dry, then pulled out a perfectly lovely, no-iron table cloth.  And I brought it back home with me.  I've used it.

It doesn't get the same rave reviews as Jaws on my screen saver.  It's boring.  But I've made it my own fish story.

(And if you want a great place to say in Maui or Kaui, let me know.  I may be able to help you create your own fish story and it won't cost you an arm or a leg or a wahoo!  Check out Timely Shares!)