The second happiest day of my life. 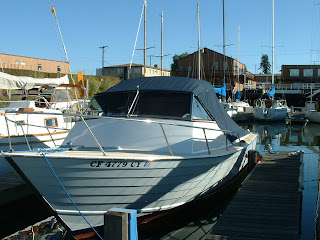 I had a serious talk with God a week ago Tuesday.  Most of my talks are usually telling God what I want him to do.   But Tuesday, I decided the talk was one way.  So I decided to listen.

I wanted to sell my boat, the Hubba Hubba.  I kind of inherited the Hubba Hubba, after my husband passed on and his boat-partner decided it was too much hassle.

I had tried to do it my way.  Between Craig's List, e-Bay, trying to give it to charity (rules have changed and they have to keep it for two years), tried to give it to the Sea Scouts...they never returned my call - really?, put it in classic boat lists online, called and talked to the broker in Lake Tahoe about selling a Chris Craft (no, I don't have a permit for a salt-water boat to convert it to fresh water), listened to a boat broker in Alameda who couldn't tell me anything except he'd want $3000 for his part.  ARGH!

How come I couldn't sell it like I sold my dad's Prius about two years ago?  That day I just got the inspiration to put the ad in Craig's List...and ka-bam!  First call within five minutes of posting it with the lead of "Sad for my dad, good for you!" brought the buyer the next day who paid me all cash.  It was inspiration...totally.

So here's what I got from my conversation with God.  How much more do you want to put into it?  Nothing.  You've paid the insurance.  You've had it surveyed back in May.  You did about $4000 worth of work on it as required by the insurance.  NO MORE!  Okay, so what do you have to do, God said.  I replied, literally give it away to stop the bleeding now!  Then do it.    I called the marina and left a message for the boat yard guy and the marina owner.  I would sell it for $1.  And I was happy!

And then I went on my bike ride to see the new properties for sale that week (I am a real estate broker in my town, and ride everywhere).  And that's when I ran into John B., a one-person broker who works in Alameda.  He doesn't do anything with boats.  I had no reason to tell him about my boat.  But I was saying that I was selling it for a dollar and getting on my bike.  He was the very first live person I had spoken to about it.  And he whipped out his cell phone and started dialing (well, punching numbers). I spoke to his son-in-law, and he was interested but didn't know too much about boats.

That afternoon, Jorge came down with his friend Charlie, who had a small bit of experience, and they loved what they saw.  And that is what clinched it for me.  It seemed like the Queen Mary to them, not a cuddy-cruiser.  I showed him the survey because disclosure is what I do all the time for real estate.  I said I didn't want any hassle.  If he wanted it he could have it for $1.

The next day I thought we had a done deal but there was a bit of a hassle with the insurance.  In the meantime the owner of the marina said "I'll take if off your hands."  Oops.  Too bad.  Got a buyer yesterday but I'll call if there's a problem.  That was good.  If I lost the one, I'd sell it to the other.  But the second guy would rather tell people that he'd ripped me off and stole it from me.  That's the modus operandi he exudes.

The day before I had shown Jorge and his friend, Charlie, how to run the boat.  It's very basic.  But I also said that I created a 'Start-up' checklist and a 'Shut-down' checklist and if they don't want to screw up....use it!

On the day they took it away, I sent them down to start the engines.  When I got there they were scrambling around.  And I realized they were NOT using the checklist.  And I talked to them like I was their mother (if they had a mother who also flew airplanes and gliders for a living back in the day).

What did I tell you yesterday?  Use the checklist.  I told you I was a commercial pilot a long time ago, and checklists are the Bible to us.  What makes you think you can see the oil in the engines, or the transmission fluid levels without using the dipsticks?  How do you know it didn't leak out the night before?  Then you'll find out what a real problem is when the engines freeze and you're in the middle of the bay.  Yes, ma'am.

Bottom line....Jorge and his wife bought it on Friday, in four days.  No ad.  Very little hassle.  Two degrees away from me, through his father-in-law?  And he found the buyer?  How did that happen?  Inspiration.

As my other friend John (who had a boat nearby) was rejoicing with me and saying he should sell his boat for one dollar, we turned and walked away.  I had two tears coming down my face.  And then that moment was w-a-y over.  I smiled.  I knew what Carl would be saying about this transaction.  Why didn't you do it sooner?

Perhaps I'll learn to turn to God a bit quicker.  I need to be quiet.  Inspiration.  Totally.