It was the year of 'dollar days'.

Our family used to (well, I made all of them, Carl, Sutter, and Evan) answer the following questions, every new year.  Gosh, even I learned what was on everybody's minds...sometimes we just don't pause long enough to ask, much less answer.

Last year I didn't complete the survey.  Yet it does give me some time to ponder.  So....here's the survey!

What’s the most fun you’ve had in 2012?  New Zealand with Sutter (and sometimes Sean).   It is an amazing small country...that seems to know its mind. 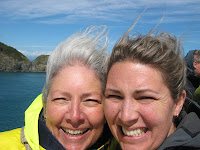 What’s the weirdest place you’ve been om 2012?  Taking the walking Tour of Destruction, in Christchurch, lead by Sean, our local expert (just the 3 of us, super informative about the buildings coming down and the new 'Frame'). The city is not rebuilding, it is renewing - coming up with a whole new plan!

What’s the biggest personal accomplishment you’ve had in 2012?  Going to Maui, two weeks after NZ, returning home on Dec. 21. It was very quiet: looking out to the ocean, and looking inward to myself.  Peaceful.  Just what I needed, to think.

What’s the coolest thing you’ve seen in 2012?  Seeing the Pop Up Shops (made out of shipping containers) where there were none before.  Many of the businesses were completely wiped out.  These went up (new just as I got there!).

Where was your quietest moment in 2012?  Watching the filled up full star sky, in Havelock, NZ, from the house Sutter and Sean rented there for 3 nights. I felt so insignificant.  It was unreal.  I got over it the next morning.  Too bad.

Who has been the most inspirational to you this in 2012?  Anybody and everybody who was affected by the needless mass shootings in America.  For that matter, any shootings.  This has got to stop.

What has been the biggest challenge to you in 2012?  Making my goal of writing a post once per week for my blog Boomer-Chick-Musings.com , YAY!  That's besides writing my real estate blog weekly, MarilynSchumacher.com , and now as an invited contributor to Bay Area Real Estate Trends.com   I need help about figuring out how to take my blog Boomer-Chick-Musings to the next level.  Anybody have any suggestions?

What’s the best book you’ve read in 2012?  I'm sure I did read several.  I just can't remember.
What’s the best movie you’ve seen in 2012?   Flight with Denzel Washington.  Having a bit of a  background flying planes....this was an amazing story.

What’s the biggest change you’ve made in 2012 ?  3 things.
In March I quit being the "Designated Broker" (one of two) at my real estate office.  I don't need the hassle for not much pay.  After a bunch of years - it was over.  In September I sold our 1966, 26' wood, twin-engine Chris Craft.  For $1.00.   After a bunch years - it was over.  In October our corporation was dissolved.  Members (most were Carl's clients) realized that one of Carl's designs, the Express 27 sailboat, wouldn't be built...after they had put in many years with Carl trying to make it happen.  Sold hull moulds to the existing fleet - for $1.00.  After a bunch of years - it was over.   In two of the events, I heard Carl's voice in my head.  He said "What took you so long?"  Argh!


Anything else you want us to know?  I'm happy.  I'm well. I ride my bike around town quite a lot! I take my golf lessons weekly, and play some (it is therapy, with Woody my golf teacher).  The old beast of a house is going strong. I love listing and selling real estate as a Broker Associate, working mostly in Alameda, hoping to give the best to my clients.