Hey mom, I hit a truck, with a glider!

April 04, 2013
Back when small local airports had a airstrips along the San Francisco Bay, I worked at Sky Sailing Airport.  It was all about glider flying and we flew, when conditions were right, next to Mission Peak in Fremont but we were located off freeway 17 (now known as 880).

When conditions weren't right, the fly-boys often got creative and that included me, one of the very few fly-gals that worked there (one of the gals before me, and we know each other, was Debbie Gary who is a world renown airshow aerobatic pilot).

I started with nothing and ended up with a flight instructor rating for gliders and one for single engine land airplanes; a commercial certificate for airplanes, gliders, and multi-engine planes; and a instrument rating.

Eventually, several of us ended up flying in Alaska for a company out of Chico, in DC 4's.  These are 4 engine beasts, slow and lumbering along, but great for hauling stuff.  We flew them in and out of  Kenai, Alaska during the salmon run in the summer. 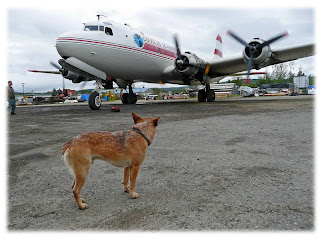 One morning at Sky Sailing, when there wasn't much to do, and the clouds were low (fog) we pulled a winch (not a wench) out of the hangar.  Here's an idea of what we did.  We towed it up to the windward end of the airport and dragged, by truck, the end of the line to the glider where we hooked it up and launched it.

However, at one point the airport truck got stuck stuck in the mud, just off to the side of the dirt runway, near where we were taking off.  Mr. Cowboy-pilot decided he knew how to rock that truck out of the mud and shoved it in gear.  And he shoved it further into the muck.  Oh well. We could work around it.

Once we got the hang of it, we could yank the nose of the glider way up, release the towline, and pitch down to get speed, and then come into land.

As the fog lifted and students came for their lessons, we went back to towing with airplanes and the winch was put back in the hanger.  All was well.  And the truck stayed off the runway in the mud.

I kind of inherited a student that day, who usually flew with one of the guys.  But Mayfield wasn't there and I wasn't busy so I said I'd take Walt up.  He was older but loved flying.  Walt probably had at least a hundred lessons at Sky Sailing in his log book.

When we were coming into land, I was a bit surprised to discover Walt was lining up to land on the drag strip next door to the airport!  I told him about it but he was completely focused on the drag strip...it did look like a landing strip.  But it wasn't.   I took over, with not much altitude, and landed the glider perfectly on our crummy strip.

Except...there was a big bang as we just touched down.  The glider stayed completely straight and continued to roll to the staging area.   What was that?  Nothing had happened. What was the bang?

As I got out of the glider I told my next student to go ahead and do a pre-flight check while I finished with Walt.  Then my student asked me...what was the big dent in the wing tip?  What?  What was he talking about?  Oh my gosh.

I had hit the truck (there was the dent at the top of the vertical edge of the truck cab) at the perfect moment: the plane had stopped flying (stalled), with the main wheel on the ground.  And the wingtip wheel got pushed up straight into the wing.  The only thing that was damaged was the glider...and my ego.  And if I didn't take over for Walt we would have landed on the drag strip.  Hhmmm.

My student got another plane.  I tied the glider down.  But nobody flew the purple glider for a long time, while the wing was repaired by our mechanic on site.  I didn't cry.  But Mr. Cowboy-pilot had to get the truck out of the muck.  And it took some work.

I called the FAA at Oakland Airport and talked with the guy who had made me some type of 'safety' instructor or something for the airport.  Now I was telling him I was in an accident!  He laughed.  What?  That's funny?

I kept the bent rib from the wing of the glider that Barry the Mechanic gave to me.  I still have it.  And it's still hanging in the carriage house.  Maybe for sentiment.  Maybe for the memories.  Maybe, well, just because.