May 09, 2013
Are you Mrs.CAD EE UU?  That was a question asked by a local mechanic years ago.  No, not so much.  People see it on my car license plate and make that assumption.  Every once in a while somebody says it properly....Cad-O.  You have a French background to know that.

Cadeau is the name I gave my first car...a used Balboa Blue '67 VW bug.  I loved that car!  Got it at the end of high school so I could commute to Cal State Long Beach.

I didn't plan on giving the car a name...but the Pep Squad chicks at Corona del Mar High (Newport Beach) gave me blank California license plates for guiding them along during my senior year.  We made great friends with the cross country team and the swim/water polo teams when we came out to cheer for them.  Those teams alway felt so ignored....and then that year they weren't!  YAAAY TEAM! 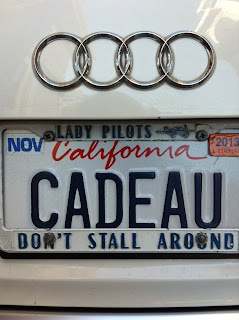 Cadeau has seen several cars during it's life.  It's a life that is ageless...as long as you pay your money you get to keep the plates.  Adding all those years up makes it one expensive gift...but worth it.

The VW bug was smashed in a slow crash when a Ford Fairlane and the little white-haired lady sitting just eye level at the wheel decided to coast through the stop sign and into my moving car on a Sunday late morning.  My car was totaled, and the intersection shortly thereafter became a stop light.  The heavy metal Fairlane was hardly damaged.

Next the Cadeau was attached to a Ford Escort. That was the first new car Carl and I bought... and financed.  Carl couldn't sleep for two nights.  How were we going to pay $124 per month for it?  I think the dealer gave us a break because he was one of Carl's yacht design clients.  At least that's what he said. It was amazing to me how many of the gadgets in the car had been improved!  Power steering, power brakes, power windows, better mileage, a radio that worked, and factory installed seat belts.

Next up...an Acura Legend.  I leased that car for 5 years.  Seemed there were some tax advantages.  Then the Toyota Camry.  I had that for a decade.

After Carl passed on, I got the Audi A4.  I still have it after 10 years.  I love the look of it.  I've driven that car 115 mph on US 395 along the back side of the mountains going to Mammoth Lakes.  Then I slowed down a bit.  No tickets.

BUT the real reason I got thinking about the Cadeau was yesterday, driving from San Francisco on the Bay Bridge.  It was gorgeous outside and my daughter Sutter was by my side, from New Zealand, for a short time.

Suddenly I had a flashback.  It was a dark and very stormy night.  My drive in the VW Cadeau was in heavy traffic out of the City and onto the Bay Bridge.  When the car did move it was blowing sideways in the wind.  The windows fogged up because the defroster stopped working.  When the windows were down it was wind-driven rain into the car.  I cautiously oouched beside a car that been on fire.

It took me nearly two hours to get home.  No cell phones back in the day.  Just me, the Cadeau, no radio, and the traffic. I was relieved and exhausted when I got home.  And there was Carl, with a hot cup of hot chocolate for me, in his warm hands.  Now those were gifts  - les cadeaux.