June 06, 2013
I was working on my blogs (real estate, and now this one).  In between I was emailing a friend who is out of town for a bit.  She mentioned that there is so much going on, about, in, out, and around, that she misses her routine at home.

Yep,  that's it.  I am going to write about routine.

Routine...it may be boring and may not be exciting.  It just is.

Routine...there is comfort in routine.  This is my Thursday night.  Writing.  I do factual things first and then mess with facts about, inside, outside my head, my life.

Routine....it may be frustrating.  I think of jail.  That's the real routine deal...day in and day out.  I think of Andy (Tim Robbins) in The Shawshank Redemption.  Digging out one spoonful at a time.  Routine with a goal.  Get the hell out.  And of course, Morgan Freeman playing "Red."  He continued to try to get out on parole and finally did.  Jail works back-asswards.  I expect it makes you want to get back in because the world is too unroutine, too unforgiving, too unforgetful.

Routine...POW's (prisoners of war).  That's survival routine.  Keeping mentally fresh and aware, but not showing it.  An amazing acting job if one must do it, I imagine.  Too many people have had to go through this.  And that doesn't count the torture. If one doesn't have a God, I believe this routine would change that. I hope this routine disappears from our lives.

Routine...doing the dishes before I go to bed.  Always. Even at 3am.

Routine...just this week I mixed up one of my routines. I ironed on different evenings. Why? Just because.

Routine....flying is/was routine.  Lots of checklists.  For everything.  Pilots say "Flying is hours of boredom interspersed with moments of terror."  Makes one appreciate routine.

Routine...gardening.  Looks routine but it's not.  Different weeds to pull or not.  Plants are always moving...growing up, spreading out, breathing fruit or flowers.  They come and go away after they've made others happy.

Routine...my dad had routines.  Every weekend he mowed the lawn and washed the cars.  Then he went to the beach, or surfing or sailing.  Sometimes he'd bring a kid or kids along.  Turns out he hated his job.  That's why he was able to retire at age 49.  The company shrink told him he hated his work.  That's a tough way to live until somebody tells you that you hate your job and he denied it at first.  My folks figured out a way for him to get out...I guess like jail.  Then he got another job.  Buying and renting houses.  It worked for him.  Very well.  And he went surfing and sailing on weekdays.

Routine...my mom had routines.  But mostly she did her stuff when we were at school.  I know she sold Avon.  Our cabinets were full of Avon.  She kept that part of her life away from the kids.  She visited with elderly women from their church.  When she died everyone, I mean everyone, said she was their best friend.  How could that be?  Amazing routines she had.  I feel bad and sad that I didn't know more of her.  Really know her.

Routine..George Carlin did a bit on routine, "Stuff."  When you go somewhere overnight you need to bring your stuff with you.  This is royal.  Stuff  (check it out for a refresher).

Routine...I've learned to love my routines.  But they're mine, nobody else's.

Routine...at this time of year, a mini gardenia plant blooms in the back yard.  I relish the fragrance and place it in my room.  And for those moments that strong fragrance is defined for me:  Homecoming, my sophomore year.

Routines and memories.  Maybe they get mixed up. 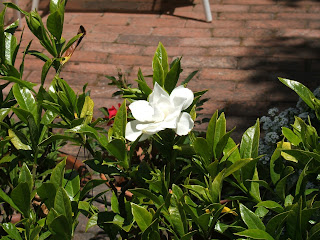