Independence Day - now and then. 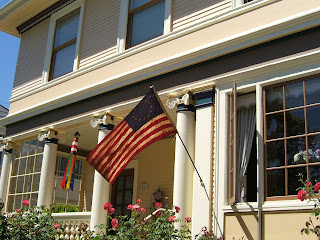 Ut-oh....it's the blue, green, and gray bins PICKUP TODAY!  Oh no!  I assumed (and we all know what that means: makes an ass out of u and me) they weren't coming this morning!  AARGH!  Get that stuff out to the curb, now!

Throw a robe on, put slippers on, and ask one of the workers "Have they picked up this side of the street?"  "No!"  Then I looked around and I wasn't the only one scrambling...the young gal across the way was dragging the bins to the curb.  Several others up the street were playing beat the clock and the truck, too.

Last night when I got home after our Wednesday church service, there weren't many bins out.  Each neighbor always put them out the night before.  But the neighbors obviously forgot that the workers had a holiday on Thursday, Independence Day.

Well, those few neighbors had the last laugh!  And they were still in bed and I was on the street.

How did this happen?  As I was scrambling, I thought it might have been longer than 7 years (Leap Year was last year)...because it took a perfect storm for the 4th of July to fall on my garbage day.  And I bet the workers did get the day off!  But I wasn't thinking clearly and I couldn't take the time to figure it out.  And as I think about it now...I still can't figure it out.

Suddenly I had a flashback.  I was in second grade in southern California, and my oldest younger brother (do you get what I mean by that?) were dragged out of bed by my mom because we didn't take the garbage out the night before. We had to run to catch the man and the truck who was already down the street, by a lot.  And that meant hustling in our pj's trying to get that guy's attention!  "Wait!  Wait!  Can't you hear me?"  And in those days the trucks and men weren't automated and had to pick up everything by arms!  And they were quick!

Blech...just get rid of that old memory.  It's all better now.  The bins are out.  My world is at peace.

Gosh..it's 6:30am.  That's gross. (Can you tell I'm not a morning person?)  I guess I may as well clean the front porch railing with Simple Green, sweep up the dead bugs, shake out the door mats, put up the American flag, water the plants, and say hello/goodbye to one of the tenants who was heading to Sacramento for the day.

Inside, I decided to iron a blue and white table cloth for the dining room, make some food for parties later in the day, and then.... drag those bins back in.

Live richly and Happy Birthday to US!  marilyn