November 08, 2013
Flying in Alaska in the summer is rather amazing.  It was light all day, except when the sun gently dipped below the horizon and then...shortly thereafter it would start to light the sky again, a few degrees from where it had set.  We had a sunset every night around midnight and a sunrise just a few minutes later, or so it seemed. 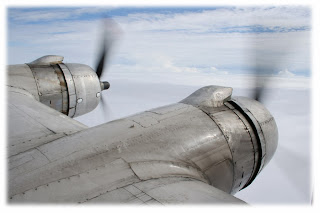 It was hard to sleep when I was in Alaska.  The days were sooo long.  And the weather was so completely opposite of wherever we took off from.  It was always that way, no matter where we flew.

I was newly pregnant with our second child.  Carl was the only one who knew.  I kept quiet about it. Carl took care of Sutter but because it was summer she went to see her grandparents in Newport Beach.  And they loved going to the beach.

We didn't want to tell our folks about the pregnancy because they had a hard enough time figuring how we did things in our lives. So we decided they didn't need to know - yet.

I didn't want to lose that job. It was the best paying job I'd ever had.  We got a per diem.  We were paid by the weight of the load (salmon) we were hauling. But we just couldn't stuff as many salmon as we wanted into each of the 1300 pound bins. I think there were 9 or so of them. But we had to do simple math to be able to position them correctly.  That math went something like this....this is light, keep it aft and this is heavy..move it toward the middle.  Too heavy and we wouldn't get off the ground or worse, we'd crash. And I got paid based on my position.  I was a co-pilot.  And it was seasonal.

And everything was a trial.  The first time I had to turn the propellers through to get enough oil to them so we could start the engines... it looked something like this.  I'd get up on a ladder.  I would grab the highest blade I could,  I'd have to jump off the ladder to keep my weight on the blade.  Then I'd do it again - probably nine times or more, for each of the four engines.

Yes, I knew that the mechanics and the other pilots were watching.  And I ignored them.  There were two of us girls.  One was the daughter of the president of the company.  And guess what.  When they saw that I wasn't reacting to their stares, they got bored.  And walked away.

But one thing I knew.  I knew I needed to get to know the mechanics.  And working out there in the middle of the night was not fun for them.  But they kept the engines running for us.  Usually.   I decided to bring them  homemade cookies and milk or coffee in the middle of the night.  Nobody else used the motel kitchen like I did.  I just did it...long before there was a Nike and a logo saying 'Just do it.'  I did this regularly.

I needed those mechanics.  And I needed to know how they thought.  There are two types of mechanics. There are mechanics and there are pilot-mechanics.  The latter knew how the pilots would think about a problem, how they would describe it, because they actually knew how to fly.  I wanted to be able to explain when I heard some type of sound that wasn't normal-like to either type of mechanic.

I did call my folks from Kenai to say hi to Sutter, and let them know I was okay.  They thought I was calling them to say Carl and I were getting a divorce!  Uh, no.  In fact, we were having another kid!  Now they really didn't get how we thought.  That was not my problem.

Oh...and by the way... when the captains would come around the tarmac where the planes would be waiting for us lowly co-pilots to do the pull-the-props gig, imagine their surprise when they saw the ground crews doing that for me!  And I never even asked once for that.

After the short few weeks in Kenai, we were sent home.  The season was over.  College kids made their whole tuition during the summer in Alaska, working in the fish processing plants.  And the money was good for the pilots.

I came home.  Then I was approached about being a fire bomber pilot in the (retrofitted) planes we had recently brought back....