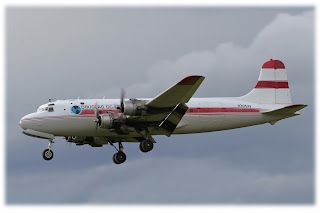 I came home.  Then I was approached about being a fire bomber pilot in the (retrofitted) planes we had recently brought back.

Once I got back to Alameda, the time was spent enjoying being big with baby, enjoying being home with Sutter and with Carl. And still teaching flying.

The next call I received from Aero Union a few weeks later, was an offer to learn to be a fire bomber.   That's right -  put fires out using the DC4 (C54s as the military called them).  Once again, I'd be the co-pilot, which was just fine for me.  The planes had to be refitted for this job and the stinky back-of the-plane-full-of-fish-juice-planks were removed and smoke retardant tanks put on.

Carl and I talked about it.  We decided this was a once in a lifetime opportunity to learn something that could be taught on the ground, but learned only in flight.  I called Aero Union back and said 'yes.'

Back in the day they had a contract with the State of CA.  Pilots and planes were based at airports near where fires might be.   At least it would be in California!

BUT....somebody else had a subtle but forceful voice in this.  It was the captain's wife.  She didn't want me in the plane with her husband.  I told the front office folks "What does she think is going on up there?  I've already been knocked up!"  As though there is anything more to do up there than to watch for the mountains we would buzzing over.

This was a time when women were beginning to 'take off.'  United Airlines had been forced to hire qualified women based on a court case.  And the rest of the big airlines were following suit.  Several of my friends said I could sue the company and probably own it.  That never crossed my mind.

I would like to think that this rare honor was bestowed on me because I could find my way around the cockpit, could take instructions, could make decisions when called upon.  And the captain was one of the guys who trained me.  He was a pilot's dream.  He taught me that I could land this huge plane, just like I'd land a Piper Super Cub, a plane that we flew with gliders hanging off of rope behind them.  He saw me fly a Mooney, which we used for basic training. Then we practiced in the big planes. There was something that he said or didn't say, that made the training click for me.

But I didn't want to cause problems.  I wanted to continue to fly for them, if possible.  I gracefully declined the opportunity.

In the meantime, I continued doing some flight instructing and when January came around...so did Richard Evan Schumacher. He was named after both of his grandfathers: Richard Ernst (Carl's dad, deceased) and Richard Edward (my dad).

Very shortly after Evan showed up, Aero Union called me again.  Would I like to do inter-island hauling between the Hawaiian islands?  This time I quickly said no.  I had a new baby!  That was my primary job...a mom.  I declined but hoped they would keep me in mind for other jobs.

Then about April, they called me again.  Would I want to fly salmon in Alaska during the summer haul?  Yes, I would but could I think about it for a bit.  Sure.  I thought, thought, thought.  I prayed about it.  It took days.  I didn't have a sense of what I should do.

Then in June, maybe July, I got a call from George...he was the one who taught me to fly airplanes, at Sky Sailing Airport.  He was the one who wanted me to type some papers for him, when I first started working there.  Sure, I knew how to type.  But I wasn't going to type for him.  I was through with that.  It took me a couple of weeks to convince him that I didn't know how to type.  It was one of the best, most effective lies I have ever told.  He typed the papers himself.

When George called me, he was flying bigger planes then, for UPS, I think.  He told me to sit down, if I wasn't.  He told me one of the DC4's I flew in Alaska, had crashed.  Three people were killed.  Both pilots (one of them was a co-pilot I trained with the summer before), plus a civilian.   And then I knew that my answer was from God.  NO.

You know, life is full of unanticipated small or large events.  The large ones we usually remember.  The smaller ones...not so much.  When that voice or whatever I heard that day, spoke to me it was as loud as anybody..but there was nobody around.

The course of events before then, and all the way to now, becomes more vivid and real as I let myself turn to something more than I can see, hear, feel.  I am willing to listen, more than ever these days.  But I think I kid myself about that.  How often do I say....Marilyn, you can figure this one out!  Um, not always.

Some days are better than others.  Some nights are wretched with a mind that can't be stilled.  Each day is its own set of challenges.  But at the end...have I actually done the best I can?

When I think of Carl, what he allowed me, encouraged me, to become, despite the fact that his dad was killed in a Boeing 720 training accident out of Long Beach, when Carl was almost out of college, I am continually amazed.

I think about how we literally vowed not to live lives that were 'normal' when we were 24 and 20 years old. That the opportunities we've had to travel because of his work contacts, with our kids, had an amazing impact on all of us. That our kids are considerate, smart, kind, show his influence on all of us. That we wanted to do it 'our ' way, with God's blessings.

When I think, now that I am considered wiser, this story is not about me.  It's actually about Carl.