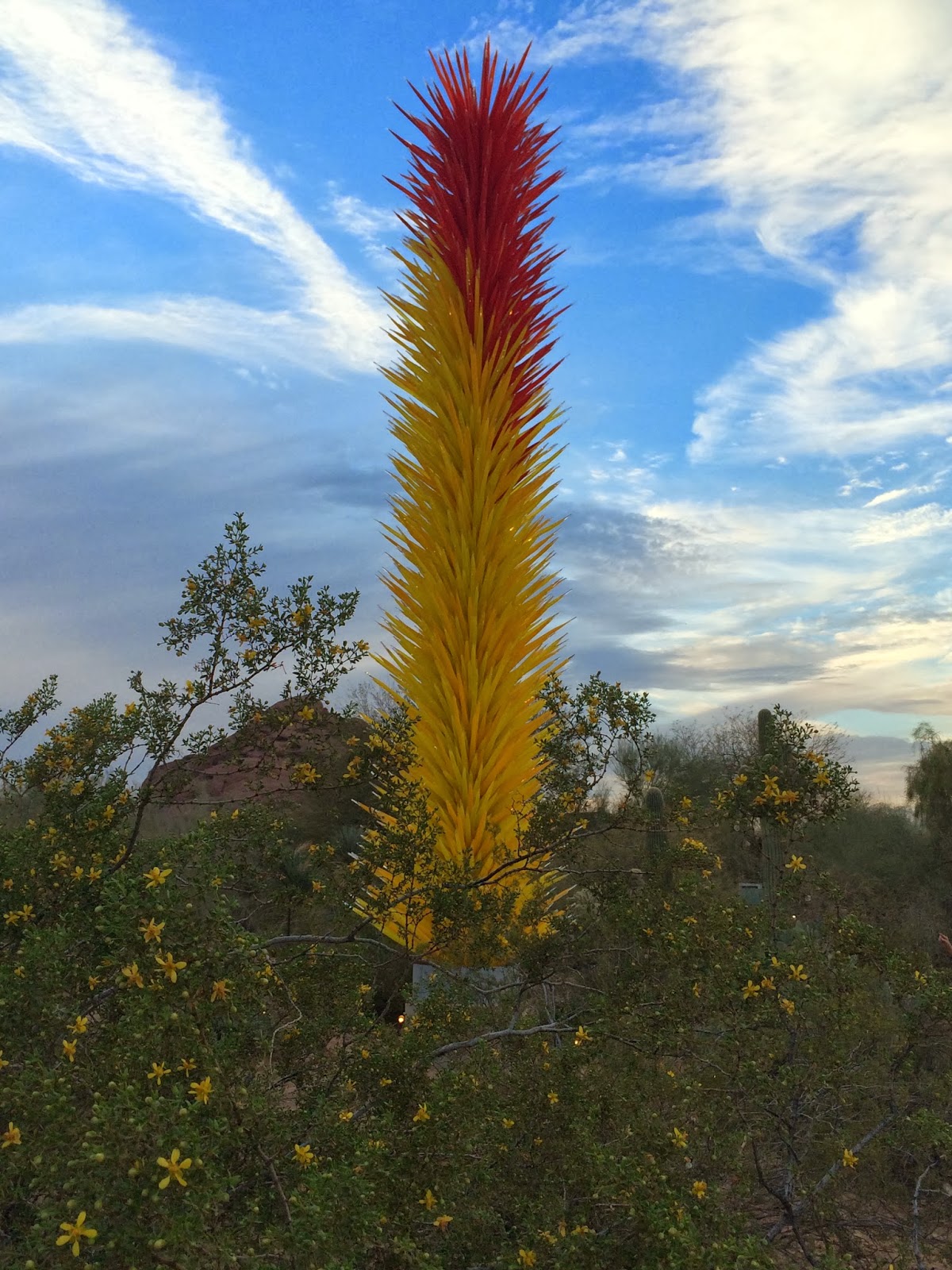 I spent this week in Scottsdale, AZ.

There were a LOT of people from Minnesota, Chicago, New York, New Hampshire. All of them were thawing out, like frozen fish.  Their hometown winters have not been kind to them this year.

Arizona is the place to be this time of year.  It's closer than Hawaii, has golf for those who play, nice places to stay, and... SHOPPING!

The shopping here is an understatement.  Each mall out-does the other, with every type of store there is, and most of them are very high-end.

I am embarrassed at the malls.  I have no right to be there. Give me a catalog any day, and I may be able to find something that might fit..and if not...I ship it back in the privacy of my home.

The malls sit on grid-like roads and are rigid, razor straight.  They barely contain the shops in their places.  Set your google maps on these streets and you'll be told to drive for 9 miles on North Scottsdale Road. After about three miles, I'm shaking my phone. "Lady, are you in there?" 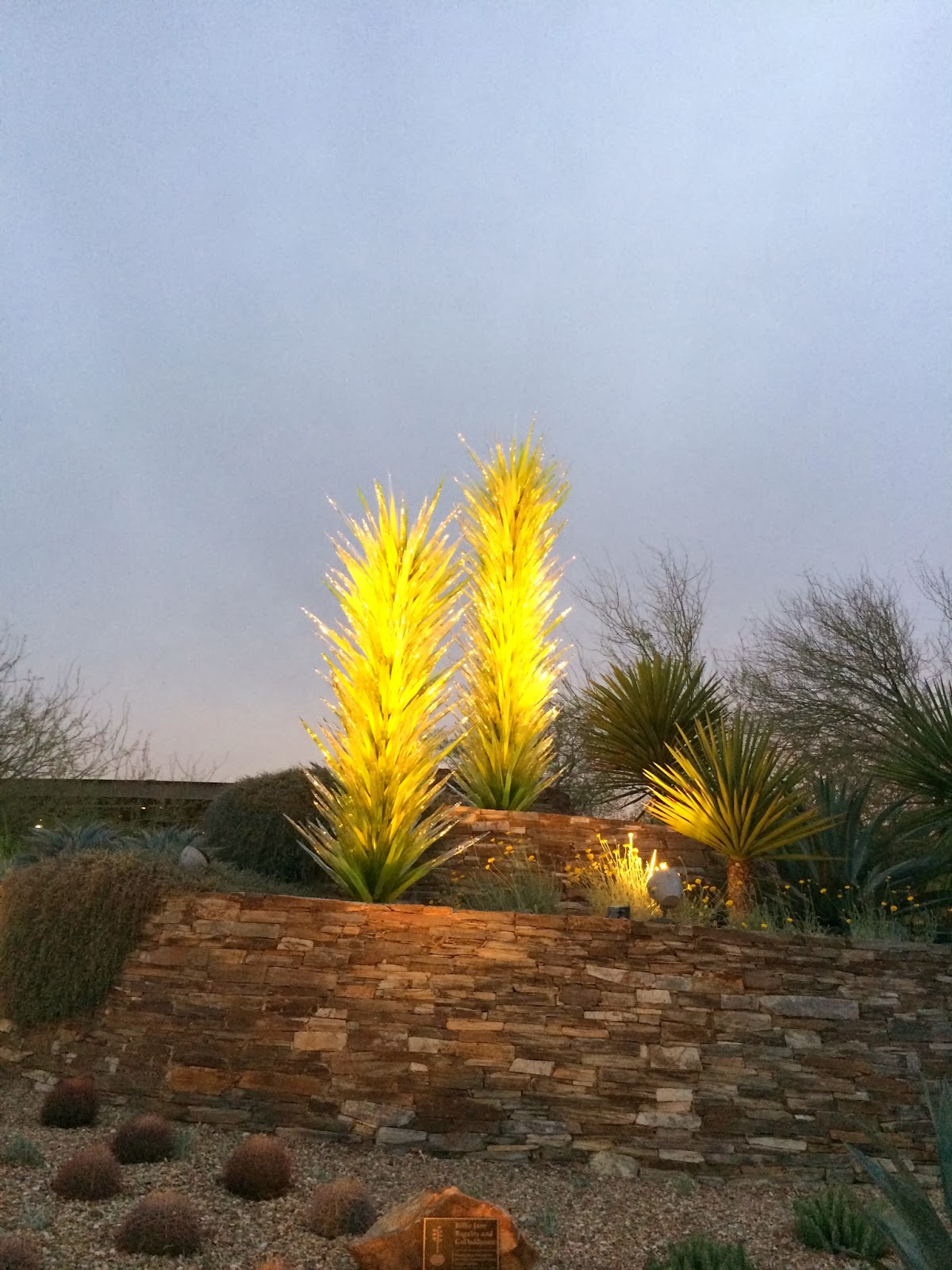 One of the highlights was my time at the Phoenix Botanical Garden, in the late afternoon and into the evening. Dale Chihuly brings extra life to his art glass installations, on display from November of last year through May 11.

The first time I saw his work was at the Bellagio Hotel in Las Vegas.  The last time was in San Francisco, up close and personal.

And these photos (none of which do the art justice) give a clue of what took my breath away...along with the sunset.  I took over 100 of them.


This pretty much capped off the week for me, booked over a year ago. 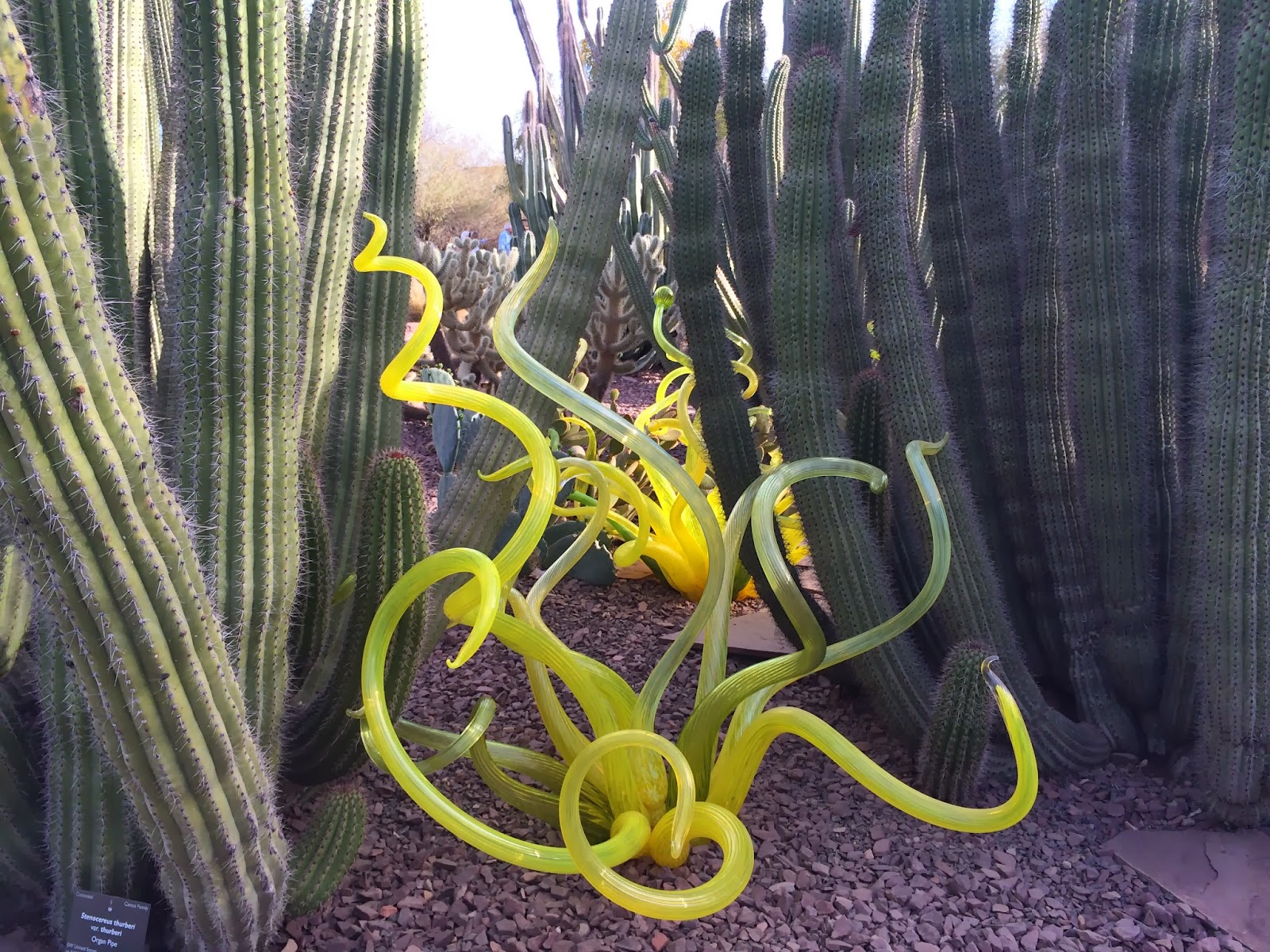 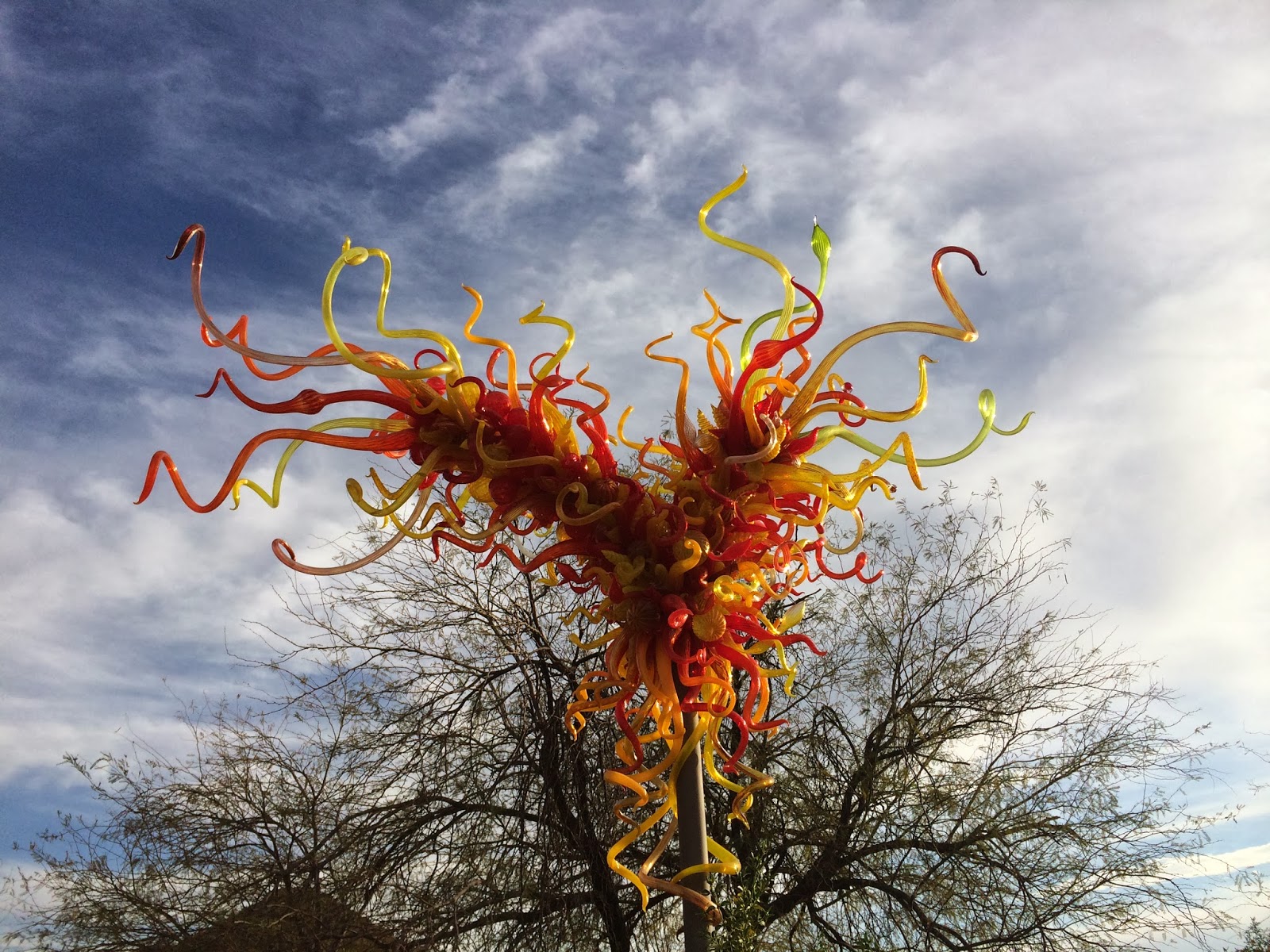 If you come during the late fall, the winter, or the early spring...be sure to head over to the Scottsdale Airport...it is how the rich folks live...being flown 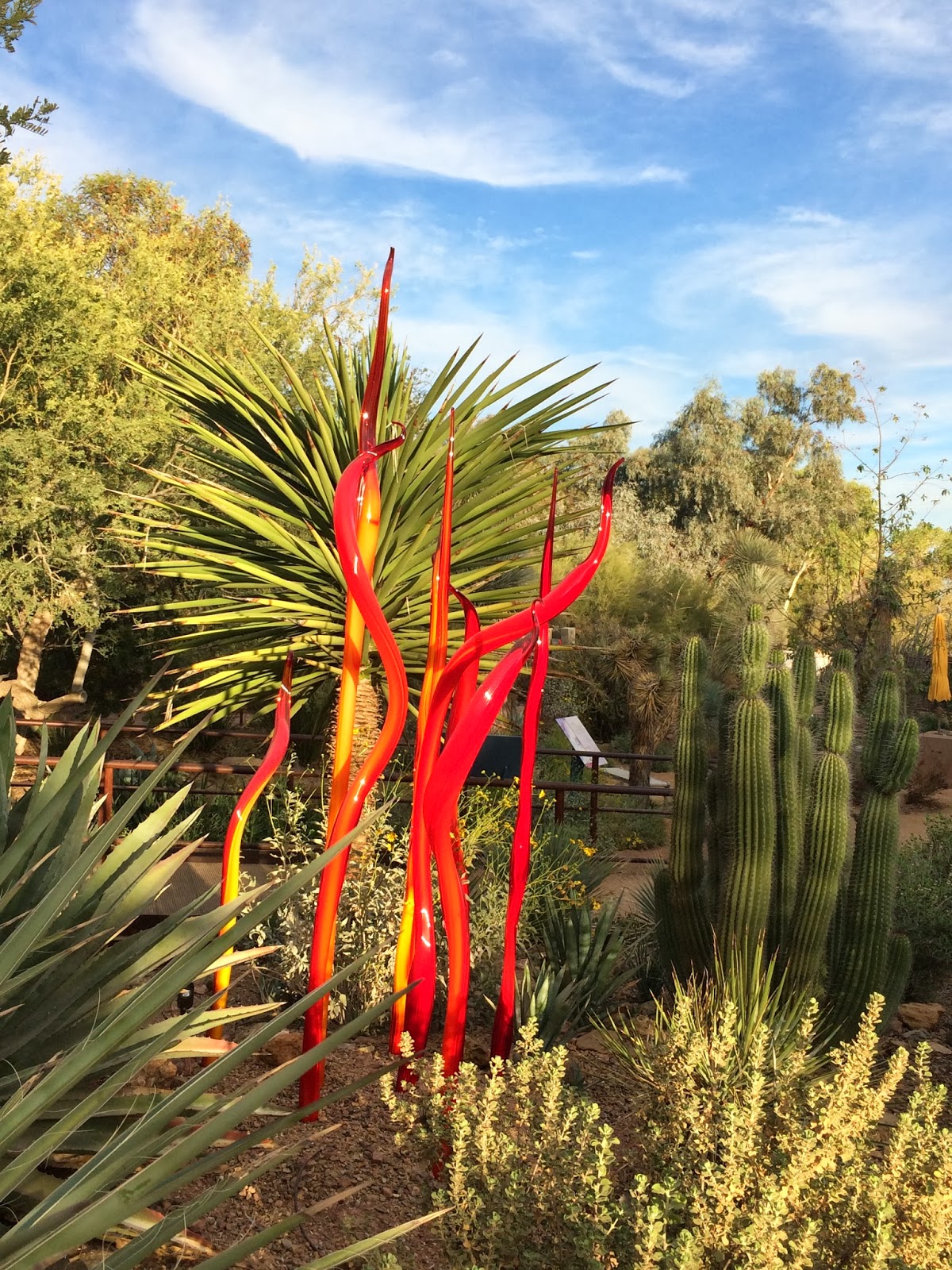 around in their jets.

The control tower activity is broadcast so visitors hear it.  The planes park right in front of you.  And they come and go pretty much all day.  Have lunch during the week at the Zulu Caffe (zulu is z in airplane speak).  It is lovely, especially on the patio...where all planes come and go.

And the public restrooms here at the airport, are better than most hotel room bathrooms!

Big limos come and whisk the rich guys and gals away.

It's more fun to sit and listen to every day people telling their stories, finding out what keeps them motivated. I am in awe of what people tell me: about survival, triumphs, and devastation.

This time I heard about how a man lost his 6 year old son who rode his bike into traffic.  He fell apart for some years, but his family stayed with him.  And then he found something that made him connect with life again, gave up the corporate job, and pushed on.

I talked with a gal who told me she had just lost her job of years, because the Scottsdale home of the Heard Museum was closing. She was working in a completely new field...and finding it rather nifty.  She was probably in her forties and so happy!  She found being a restaurant server was her next calling.  Out with the old...in with the new!  She is now leaning to doing catering!  And her great attitude was everything!

I spoke with a young guy who was planning on being a pro soccer player.  But injuries put him on the sidelines.  What's he doing now? He's working on his college degree in golf course management and is doing that at a PGA school.  He will be in charge of all of it!

And wouldn't you know, the person who greeted me when I pulled up in my car at the Villas, had just gotten his real estate license and will slowly work into full a job with a friend who has a biz he is joining.

A fellow Realtor I had previously referred a client to, met me for coffee, and told me his amazing story, working and living with his partner, both of whom have amazing talents for the business!

Yes, I'm striving but satisfied.  But keep the high-end stores away from me.