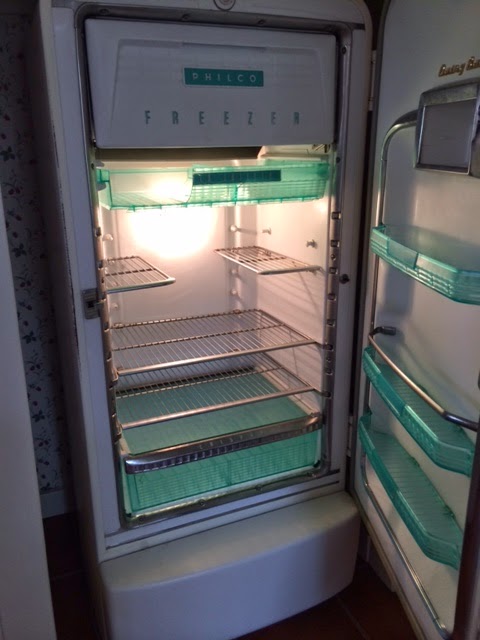 Certain items take me back.  They seem rather random.

When I'm in the moment or many moments, the time and place becomes a view from above and place I was once at.  It's like I'm seeing everything from the third person.  I'm me, but I'm seeing it as one would watch a movie.  I'm completely enveloped in the thoughts that take me back.

For instance: the refrigerator to the right.  This was on my iPhone. I know I took it recently.  It seems to me I was looking at properties.   It took me back....

...back to a day, when Carl and I were first married, living in a Victorian house that had been converted to rather funky apartments.  It's about three blocks north and three blocks east of where I'm writing this now.

I never thought where we lived was funky.  I was blissfully happy!  But it was so funky, that when my folks came up to visit, my dad said "If I knew what Carl was going to do to you, I wouldn't have let this happen."  Um, yeah, like he had anything to say about it? Uh, no.

That day, we had decided to defrost the refrigerator, which was a lot older than the one in the photo. But it took too long to melt the huge chunk of ice around the icebox. Yes, I said icebox.  The small little box hanging in the middle of our landlady's refrigerator, that collected ice all around it, as if it were a mini, mini, Mount Everest.

So in order to help the ice melt, we decided to take a chisel to 'carve' out the ice. That worked fine until... Whooosh!  Bad news. We shut the fridge door and got out of there.  We had hit the line that had Freon gas in it.  We left it alone. We were happy anyway.

So we decided to take a bike ride, out towards the Oakland Airport.  That was nice.  We decided to head home.  Whooosh!  Bad news.  Flat tire on my bike.  We were happy anyway.  Carl decided to ride his bike to the house, I stayed on the side of the road.  He traded his fine bike (and it really was fine) for his 66 Pontiac.

He showed up.  We tossed my bike on the rack on the back of the blue bomb. That was nice.  Almost home.  Whooosh!  Bad news.  We had a flat tire on the car.  We were happy anyway.  We pushed (not literally) on and got blue bomb to a local gas station where the tire was repaired..

We had come full circle and were back in the funky apartment.  Looking at a funky broken refrigerator. We need to tell the old, funky, landlady.  She told us where we could get a good used refrig pretty much like that one, at Hinks, in Berkeley.  I believe it cost us $33.  That was a lot of money for us...when we mostly had none.  But we were happy anyway.

That was my thought pattern, triggered when I saw the 'old' refrigerator.  Simpler times.

Live richly.... and use chisels on rocks, not refrigerators.