May 08, 2014
Sports brings couples together...or can drive them apart.  I've seen marriages break apart under the guise of sports.  But I think today is different.  Those that play fair together, stay together.  Kind of like life!

Back in the day when Carl and I were first married, we played ice hockey in San Francisco, weekly, with a bunch folks in the sailing biz, after work.  It was vicious!  His boss would threaten me with his (hockey) stick and make rude remarks just before we faced-off.  He was a jerk.  And Carl couldn't skate so he kind of walked with bent ankles in those boots.  It was painful to watch.


The next thing we did was to race Fireballs together on SF Bay.  I hung out on the wire while he drove.  He wanted to crew and be out on the wire, and have me in the skipper position but I said "no."   I was afraid of losing control of the boat.  I could trust him not to lose control of that boat. It was still fast and very wet.

The next big event we did was a practice race to Cabo San Lucas on one of Carl's designs, an Express 37.  It was the group's first time to race together in preparation for the BIG race which was from LA to Honolulu. That's a rather small boat to head out to sea but with Carl and my 4 best boyfriends my confidence was strong.

Our trip to Hawaii had everything on/in it.  The first 3 days we headed into the wind, praying to get into the Trades.  It was very rough, and sails started ripping apart one night when we were in a squall, (I called it a gale).

But the Trades prevailed, we got over the hump (the midway position when you have a party with funny, funky gifts put on board by friends and/or the members of the crew).  In celebration, we had a very special meal (I'm not sure if we had Mexican that night) and yes, our avocados were ripe at that time and guacamole was delicious.  Even the Top Ramon during the last night tasted delicious.  After 11 and 1/2 days, we got third in our class of Express 37s, finishing at 1am in the morning.

Sutter and Sean (S&S) both sail in NZ.  But they do it differently.  Sean races his R-Class boat, but not with Sutter. She says "ah, no."  The R-Class looks like a baby America's Cup yacht because it flies on foils.  But she crews on a keel boat during the summer. 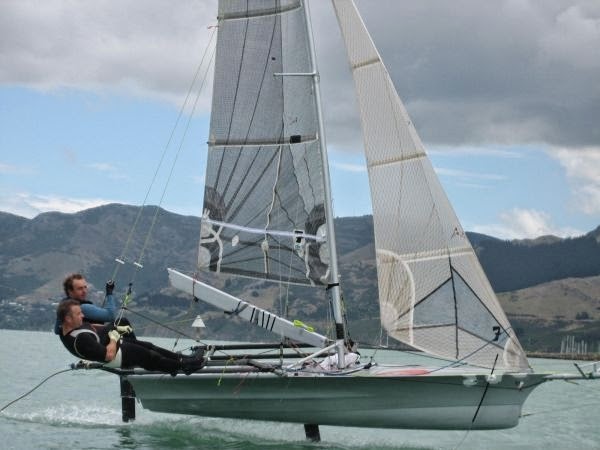 Before they were married, Sean took an amazing ride on his bike around the south island because... it was there. He has several bikes (like Evan these days).  Listening to him talk about it..the weather (nothing stopped him), the people (didn't have time for them), just going on strong.  But if I recall, the bike broke just before he finished.  And that was that.


Sutter, since then, has also toured parts of New Zealand by bike.  She told me about training for a charity ride, but when I went to NZ two Novembers ago, I saw the roads in person, through the mountains, and it was incredible! I was in awe of what she and their team did, for charity!

Today S&S are seriously playing "Let's build a house!"  And they are doing just that...from the ground up with Sean doing most of the work and supervising, and Sutter adding encouragement and income from her job.  They are loving it (well, most of it) and will have something that will be earthquake proof in Christchurch with a gorgeous ocean view from a hill.

Last summer Evan and Erin (E&E) played co-ed soccer. We watched one of their games when S&S and I flew down to San Diego for some family together time.  They worked at it and played well.

This was serious stuff, a lot more than when Evan used to run (with great determination and at an early age) chasing the ball on the soccer field.  Some friends and I often recall a kid on the team named Carl (not my husband) standing in the goal chasing butterflies, not the ball. I wonder if that kid became a entomologist.

E&E have also practiced yoga together. That demands a lot.  Something about a core. I tried yoga for a few classes in Maui.  The only core I know is in an apple.  Not so good.  I'd rather lie on the beach and swim in the sea. I did, however, become an expert at a particular pose - it was called something like 'dogs laying down.'

And of course E&E take Hazel, my grand-dog, on runs.  They love those runs!  Our family never had a dog. Carl (not the goalie) had a dog when he was young.  But I guess his mom was a better woman than me, because I was very clear I didn't want to do all the dog things when the kids or Carl weren't at home. Thus, no dog. 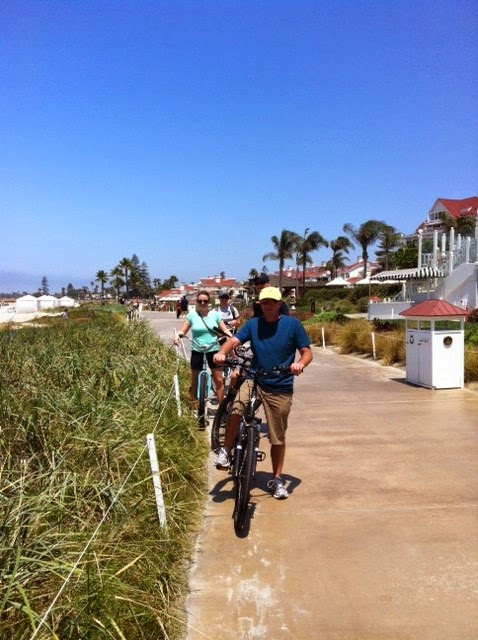 When the five of us (about to be six in July) get together, we find a place to rent bikes and roll along.

Playing at sports is fun...playing with the family is even better.

I do live richly, marilyn