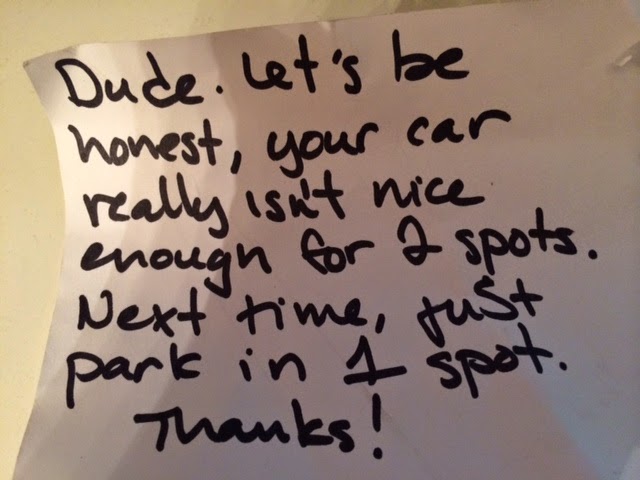 When I'm riding my bike in town I need to be sure that I'm watching for car doors opening; watching out for holes of pavement debris on certain streets, so I don't get snagged in them; watching out for rear lights on vehicles to see whether they are turning (or not);  watching out for brake lights to see if vehicles are stopping, pulling over or slowing down; listening for vehicles backup sounds (beepbeepbeep); watching where I'm going; and....

....NOT watching  for notes in the street.

But this week I did see a note that was obviously tossed off a car windshield, and I circled back to pick it up.

This is about the kindest note I've ever seen, to a stranger, who has taken too many parking spaces in a town where parking is considered almost as valuable as a decent rental unit.

It says Dude.  It calls a spade a spade.  It says nicely what needs to be said.  It's written so the Dude can read it.  And it says "thanks!" with a rather happy exclamation point!

I rather like the sound of this note, Dude.  And thanks for writing it, whoever you are!