September 25, 2014
The one good thing about flying anywhere is that you need to be at the airport on time.  Often you may have to wait for the plane to arrive, or it may need some mechanical attention thus it will be delayed, or (like me last February) I was there in plenty of time and I let the plane leave without me.

I needed to change something about my rush routine.  No more rush rush rush to get down to my second 'home away from home.'  I will take (make) some time to drive Pacific Coast Highway from San Francisco to Newport Beach. 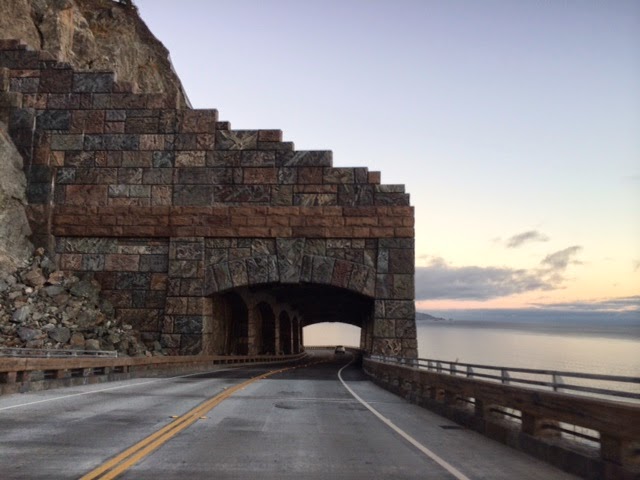 The one bad thing about driving...is there is always one last thing to do...I need to drop this at the post office, and this at church, and get my tires inflated, and blah blah blah. So instead of me getting away at 10:30am, I got out of Dodge at noon.

But hey, that's not so bad.  No bridge traffic, no traffic through the city. I'm heading out!

I found a place through either the AAA Magazine or Sunset Magazine that talked about Central Coastal towns.  Cambria by the Sea sounded like my cup of tea.  Booked it.  Now I was committed. Gosh, the article said it was halfway between SF and LA.

Well, yeah.  Um, no. It was halfway between the two cities...in miles.  Not in time.  I need to stop thinking in 'time' mode.  So leaving at noon was a bigger deal than I thought.  I'm always thinking about timing....how fast...how slow...how much can I get done in how little time.  And that is my challenge.

So after I had driven over two hours....my head was a bit confused.  Does Monterey come before Sana Cruz?  Where does Davenport fit?  How about San Luis Obispo? Yes, I did recognize Half Moon Bay..because I'd flown there and back forth over the years, and had met Carl and his boat folk during races they had been on.  Where does Big Sur show up?

Good news...if I just follow HWY 1...and know the general direction I wish to go...I will not need to change roads.  Just keep on driving. And drive I did.  It took me over 8 hours to get to Cambria by the Sea.  No...no breakdowns.  Yes, I did fill up with fuel twice because I didn't want to call AAA to rescue me ...oh- that's right.  I couldn't even call them!  No cell service in some locations.

Ah...thinking of Carl...one of the longest dates we had was when he flew me up to Alameda, so he could have company while driving back to Newport.  Gosh, I wonder if we took PCH on that trip...I'm sure we did!  No...as I drove along, I recalled we went via 101. But who needed to remember where we went...we just drove. This would be my first time driving down the whole coast

I went to farm fresh fruit stands steps from the cliffs that lead to the ocean.  I asked about the peaches and strawberries.  Yes, they were perfect.  I was no longer in Safeway-ville.

It was getting pre-dusk.  And it was glorious. I saw bridges that I've only seen on TV and in movies. I met some people who told me their stories.  I came away richer because I met them.  Just 15 minutes will do that.  I see folks all over my town and I don't have the time to sit and jaw with them or them with me.

And then I saw the whales, where they shouldn't have been.  They were playing like big babies...just eating and playing. And when I spoke to a local shop lady, Sherrie, about it she said the humpback whales had been there for weeks.  The food was abundant. The water was a bit warmer.  And they just stayed near the itsy bitsy town of Lucia. Sherrie told me that when the fog was in she could hear their sounds up the hill where she lived.  Day after day. 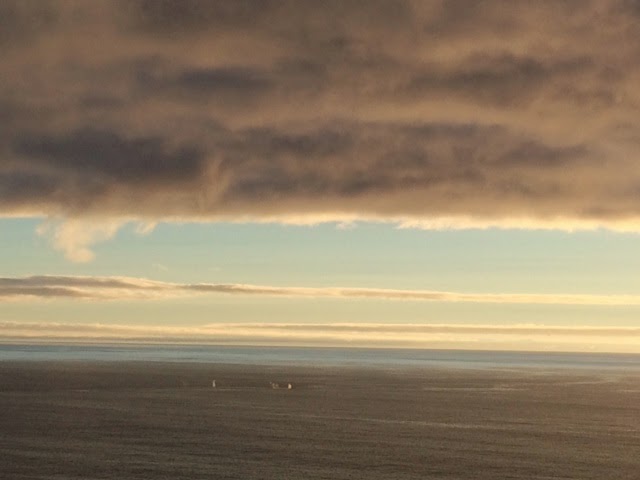 The next two hours I drove the highway curves in darkness.  Thank goodness I had music on my iphone.  While I didn't drive recklessly, I did practice what our teacher (and good friend Bill) told Carl and me and our friend Mary years ago, during the Bob Bondurant High Performance Driving School at the Napa Raceway, about taking turns quickly and how to look at them...more like looking beyond them.

I guess that explains my life.  Looking around the curves and corners, mostly staying true to course, moving forward.

Maybe I'll pick this up next week...or not.