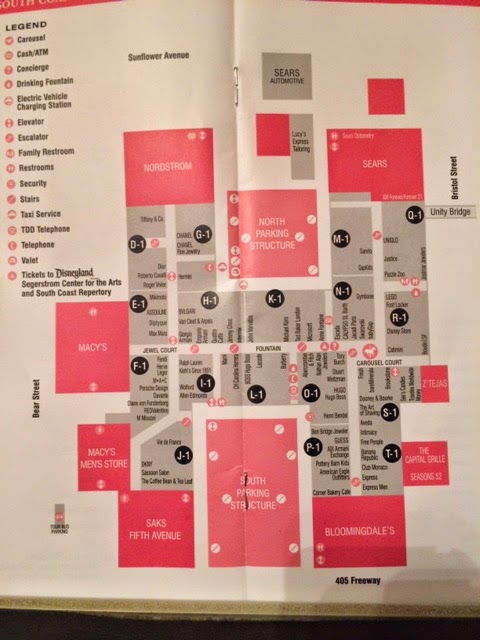 I don't know where the gene comes from that makes people love shopping.  I don't remember liking shopping when I was young much less as a teenager.

During my recent trip to Newport Beach, I realized that I left some of the face stuff I use, at home.  That was fine since I didn't know anybody that I had to impress, as I made my way down the Pacific Coast Hwy for the first 2 days.  Heck, nobody cares anyway.

But once I hit the scene in Newport...one can only guess where one will find someone he/she knows.

I made a couple of calls to see where I could find the face stuff.  Oooh..that's not so bad..there's parking at the small shopping center and I can get in and out quickly.  Ummm, no. Not so much.  That store didn't carry the full line of makeup... but good news!  South Coast Plaza does!  Not good news to me!  I left the store rather deflated.

I've only been to South Coast Plaza once in the last 3 years specifically looking for specific items...like at Tiffany's.  Now, I don't shop regularly at Tiffany's but I did need to get some Tiff's jewelry repaired. Thus, my visit.  And yes it was repaired and I took the piece home with me.

I cringed.  I took a deep breath.  As I drove around the SCP parking lot I got dizzy.  I didn't know where I was going and how in the heck would I find my car?  I was sure that millions of people were there on a Saturday.  Gosh, what an awful day to show up.  A weekend.  But I wanted to get this over with and begin my vacation.

I found a place to park.  I really paid attention to the Sears Tire Center that was close to my car. I went in an entrance.  I'm not sure I would ever see my car again.  What happens when they close and I'm still wandering around the parking lot?  Silly girl...stop that.

I went directly to a worker who was dressed to the nines and asked how I could get where I wanted to go.  Sure, go straight and then turn left at the carousal.  Then you'll see the stage across the way. The carousal...I knew that landmark because it was there when South Coast Plaza first opened.  I asked him if he had a map.  Sure take this.

This brochure/map was eight pages, four of which were the stores listed by alphabetical order.  Okay, I could do this.  I used to fly in small planes across the United States and find those itsy-bitsy airports.  This 'map' made general aviation charts look easy-peasy.

I worked my way through the stylish crowds, trying to pretend I couldn't be seen.  Oh, that's right. They could care less about moi.  Gosh, how many Michael Kors purses and bags were attached to the chicks, carelessly waving them about?  That's a lot of MK purses.

I found the store.  I must have looked a bit panicked because the customers were very kind and let me move on through the line.  Computers do amazing things...including telling me what I wanted because I clearly could not explain it. Voila!  Done.  Take my credit card and get me outta there!

I wondered if I should have marked my way back by laying down some candy, like Hansel and Gretel did in the fairy tale. No, that would never work here.  The custodians would pick up anything on the ground, very quickly.

I found the entrance/exit.  I was free!  Got into my car and started heading for the ocean. That's when I would be at my home away from home and could breathe.  And I'd have that face stuff on, too.