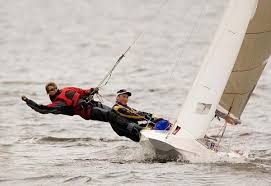 Sports brings couples together...or can drive them apart.  I've seen marriages break apart under the guise of sports.  But I think today is different.  Those that play fair together, stay together.  Kind of like life! Back in the day when Carl and I were first married, we played ice hockey in San Francisco, weekly, with a bunch folks in the sailing biz, after work.  It was vicious!  His boss would threaten me with his (hockey) stick and make rude remarks just before we faced-off.  He was a jerk.  And Carl couldn't skate so he kind of walked with bent ankles in those boots.  It was painful to watch. A Fireball...not me..but you get the idea. The next thing we did was to race Fireballs together on SF Bay.  I hung out on the wire while he drove.  He wanted to crew and be out on the wire, and have me in the skipper position but I said "no."   I was afraid of losing control of the boat.  I could trust him not to lose control of that boat. It was still fast and ver
Post a Comment
Read more
More posts