As a family we had camped at Curry Village, and then Carl and I took at least one of our kids, maybe both, when they each went on a trip for several days during 8th grade. (This is one of the best times to get an idea of what the kids and their friends are up to.  All one needs to do is drive and listen...and you may find out what you want/need to know or maybe you don't want to know.)

But these days, I no longer camp. Outside. On the ground.

If Carl and I camped, we would prefer 50' catamaran sailboats in the Caribbean and before that, about 40' sailboats during autumn in Maine, or before that, an Express 37 sailboat (designed by Carl) with me and my 5 best boyfriends (including Carl) for 11.5 days racing to Hawaii on the Transpac Race.

But this was a treat that included a two night stay at the Ahwahnee Hotel. My friend couldn't use the trip so I said 'yes!' to the event that she was offering me. The Ahwahnee has had the Chefs Holidays for many years. Folks (and in some cases three generations of them) come from all over the US to meet the chefs, watch the chefs, be fed by the chefs, and get a tour of the huge Ahwahnee kitchen on the last morning. After I moved into my room with a view ( yep that is Half Dome) from my window, I was ready to join the crowd. My main question of each person or group I spoke with was 'Have you been to the Chefs event before?' and it the rest of conversation took care of itself.

I like this form of talking. No fuss, no muss, just genuine jawin' around. And each time I found another Best Friend Forever. In fact I found I had so much in common with each one I met! How could that be? I met a couple of gals who live in Napa and one of them has a partnership in Alameda.

While we were waiting for the doors to open for the last big bash comprised of a six course meal, the kitchen had a fire in the 'bread room'. The announcement came that there would be a slight delay. But everybody was calm and composed and the show went on (to us) flawlessly. Those of us taking the tour the next morning saw where the fire started. And the head Chef, Pearcy Whatley, was the one who put it out.

At the Gala Dinner I was seated with three couples. Each was from a small town nearby. But the stories they told involved boats, flying planes, their kids. One wanted know what I knew about putting his motor yacht (when it was completed) through sea trials. Two of the couples knew each other and had similar histories...divorced and then each of the men married women quite a bit younger than themselves and those marriages seemed to be going very well.

But what can you really know about people in just a couple of hours? I know that everyone was on their best behavior that night. I know that those I saw were not intoxicated. I know the wait staff provided me with Perrier water and non-fizzy but fancy water, because I don't drink alcohol of any kind. I know that each one I met, whether I sat next to them at a demo, or found myself standing next to them tasting samples, once I asked the question...have you been here before? it opened the conversation for me to follow and them to lead.

While I was having a muffin and juice in the bar the last morning...two separate folks called me by my name...and asked what I was up to that day. They sat down with me. I think the niceness comes from and with the special location...Yosemite. It is hard to imagine anybody being other than just plain nice in such a special park. 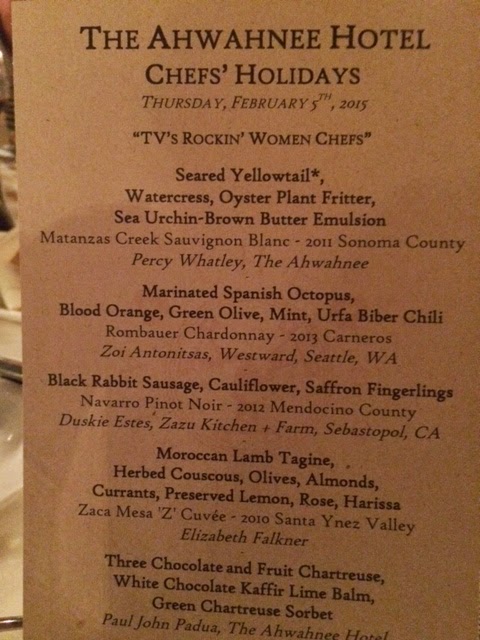 I still love watching the cooking shows on TV. I love the artistry with which they present their dishes. But alas, I am not a foodie. I just appreciate good, simple food and good, simple people.