Back yard woes and wonders. 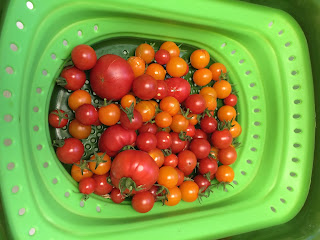 The tomatoes are growing along fine, thank you, without much help from me.

The basil has died, with no help from me, this year. It outgrew its container, and then fell off the low brick wall and broke the pot, as though to say to me...'See what you haven't done? Now I'm dead.'

The sprigs of spearmint have now turned into stalks of trees, with no help from me. The couple of times I used it in iced tea was nice.

I let the orange/yellow peppers grow back from seeds that I never took out of the container last year!

I'm not quite sure why I planted so much lettuce all at once. All of it went to seed and eventually all became stalks of lettuce. They fell over in their containers.

This is my worst year of container gardening (which I've done for several years). I suck at it.

Maybe the drought is affecting me, and not the veggies.

The roses in the front and back yards look a bit rasty and ugly, but they've been around for a few droughts over the decades, so they still produce flowers, but they aren't as fragrant as I remember.

The birds! The Birds of Paradise, are still going strong..but the leaves are turning white at the tips.

The hydrangeas have always looked gorgeous, and this year is no exception.

And my gardenia, that I thought was coming back....uh, did not. The whole bush is now gone.

The lemon tree/bush is doing very well all by itself. I take all of the extras to Debbie and she then ships them off to her co-worker who insists on having Meyer Lemons for his health needs.

The apple tree...I see small fruit but it will be interesting to see if those fall off when they are just dabs, or stay on the tree to become large. That tree never ceases to amaze me.

But the Sun Gold (small and orange) tomatoes are truly God's gift to mankind. Those literally are tomato candy. My treat to myself is to get good mozarella cheese, put the tomatoes over it, twist some sea salt and grind some pepper over them, pour balsamic vinegar on them...and totally enjoy it, bit by bit.

I feel much better about the garden, now that I've admitted that I'm a total failure.

I'll head over to the garden center, 2 blocks near, and pick up some more lettuce, basil, and peppers.

Plenty of time left to see those grow so others can enjoy what I have.