July 23, 2015
The last few days have seemed a bit like Chevy Chase's Family Vacation around here. That movie is on my mind because it's being (re)released with a new cast and the same premise.

Instead of heading to Wally World in Florida, my guests left Florida and came to California. Instead of a car trip, they carried plane tickets. Instead of taking cabs, they used Uber to get around San Francisco. 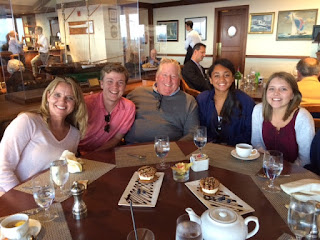 My brother (Tim), his wife (Kim), their two college-aged kids, plus two of their family friends came to the house for the last 3+ days. Delaney (son) is in his second year at Vanderbilt, and the daughter, Teddy (named after her great grandmother, Theo) is in her senior year of high school.

Teddy's two gal pals, Caitlyn (she had her name long before Bruce Jenner did), and Caroline, joined the family-venture while they toured college campuses. It's all alphabet soup...USC, USD, USF. Then they pulled out the big guns - Pepperdine and Stanford.

Not one disparaging word was heard out of any of their mouths, the whole time! Except for some yawns, they had big grins and laughed hard.

Because I ran out of bed space, two of them slept on two air beds that the parents bought at Target, before we had dinner at the new-to-us-in-Alameda, The Habit. their first evening here.

Sidebar - born in Santa Barbara 30+ years ago, it's a treat to have The Habit so close to home now! And for kids who grew up in Newport Beach, neither Tim nor I had ever heard of it before, yet we were raised on burgers. If you haven't been there, every thing is great, and the onion rings are to die for! The bad news...I can ride my bike up there.

And the luggage! I had my doubts about where they would put each huge suitcase with those spin-in- every-direction-roller-wheels. Not my problem...and that's why I only went downstairs once. Actually I think the pieces of luggage could be used for beds, they were so large!

I was exhausted just listening to the conversations, much less going out and creating them! But every one of my 'guests' were so knowledgeable, so articulate, so wise for their years (including the parents), I usually didn't care to contribute anything, thinking that I would sound stupid.

Every guest should be like the ones I just had. Independent, yet cooperative. Quiet, yet laughing a lot. Open to new ideas, but keeping in the back of their minds, those things that do work. And they cleaned everything at the house on their way out the door (while I was taking my therapy golf lesson).

This was a trip for me...and I never left the area. Here's to living in the fullest, having great friends, and family. Almost too much to ask for, and then still receive it.