September 04, 2015
I had an article about water leaks in my real estate blog. I subscribed to a company that provides additional filler for blog posts during the week, when I'm working.

We did have a leak. And I didn't know it. The tankless water heater for the tenants' use was starting to give warnings about wanting to stop working...and when I called the plumbers who installed it about 17 years ago (a very healthy run for a water heater's life), that's when they found the leak. On my laundry room floor, blending in with the floor, just where I wouldn't walk.

So I had the guys come out and change both of the water heaters. All is well.

But Jessie, one of the plumbers, notice the big bulletin board that was covered by a map of the United States. And tacks were placed all over it. It used to be hung on the wall in the hall, but it was resting against one of the walls in the laundry room.

He wondered if we had been to all of those places, marked by the tacks. Yes, I said. Those are places that we went as a family or as individuals. Some of those tacks have been missing for years..but lots of them are still making their marks where the Schus have been over the years.

The white tacks were mine. They gave clues about where I had stopped along the way while delivering planes from the east coast to the west. I'm sure my logbooks would trigger something about the places, hidden way back in the depths of my memory bank. 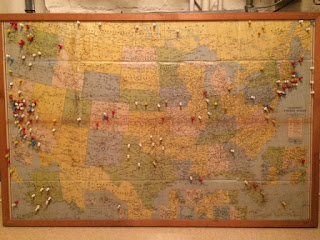 Normally we flew together. But not always. More likely we would agree to meet up at a destination by the end of the the day. We could only fly during daylight per the Piper Aircraft company's rules. During the summers those were long and often very hot days.

And there were aviation gas shortages back in those days...so sometimes we could be flying in on fumes and the small airports wouldn't have avgas. So with permission from the guy running the small airfield, we would be able to tuck a tube into the gas tanks and suck (literally) out the gas from an unused plane, that would be drained into a bucket, and then we could pour the bucket of gas (or more buckets) into our flying machines.

When I look at this map, I am filled with awe about what our family has done, both collectively and individually.

And here's the photo that started this small adventure this week. That's Sutter in Carl's arms, and that's me sitting in the cockpit of the airplane that Carl's dad built. Carl owned the plane after he dad passed on, and then he gave me instructions about how to fly it, and I did for several of my required cross country flights. Selected friends (those who I worked with) had the chance to fly that sweet plane. One reader wrote back that it didn't feel like it was flying 100mph, and my response was it felt like 100mph in our faces, but maybe not over the ground. 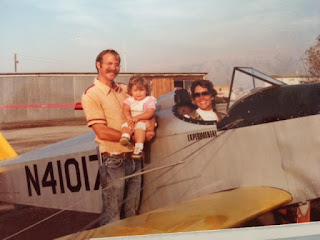