I was riding my bike along the beach a couple of days ago, and saw 'werk' scrawled across the pavement. Then I saw some other words that indicated a running race had been run in that area recently, "Keep going!'  "You got it!"

Today I decided to take a photo of it, if it was still there. And it was, so I did. 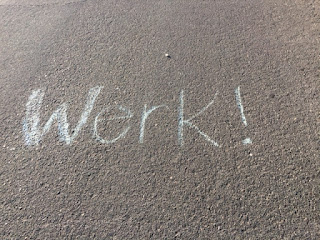 Then while I was driving home, I heard about the mass shooting in Umqua, Oregon. And the air was knocked out of me. Really? Again? I couldn't get the story...there was so much going on with the fiasco.

I was able to put it out of my head. And then I heard it all over TV. And now, I've heard a repeat of President Obama's press conference. And I saw the photos of those grieving. And I sank lower.

I'm not sure about what I can do about this. But I'm not going to stand by and just watch. I'll just be one voice. Or one voice of millions. I do know that if the public makes a concerted stand against guns, our elected officials will need, sooner or later, to take a stand or they will be removed by our votes.

A sweeping change is taking place across America. It starts small and keeps growing until it cannot be ignored. I want to be one of the sweepers.

We need more writing on the sidewalks and bike lanes. It doesn't matter if we spell it right or wrong.. We just need to make it werk.