A huge sigh of GONE!

I’ve been clearing out more….stuff. This is the stuff that somebody (not me) may want. I’ve already cleared out my office closets and tossed/shredded all of that leftover junk.

In my life, at this time, I think I've handled the big stuff. Now I want the small stuff out of my life. I’m not sure why. Maybe it’s just weighing on me mentally (and physically). 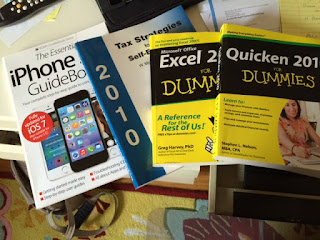 I had two "Dummie" books, 4 years apart, dealing with Excel spreadsheets and Quicken quasi-bookkeeping. How about that iPhone 5 book? Good intentions, wasted money. Never has a shelf looked cleaner. Say BUHBYE! Those got tossed in the recycling bin.

This week my main TV was working one night and then not the next night. I called my media man. He was able to come over the next day. And Evan, my son, who has been complaining about the TV, will find a new TV (new, I said), not larger, but with more vivid colors) that was installed that day. Turns out my remote was cracked. (Do I get up at night and do things that I don't recall doing?) Replacing that ancient remote has wiped out my inventory of remotes, and now I'm down to one remote. Notice the iPod charger.  GONE! 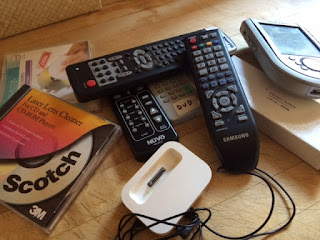 Goodwill was the beneficiary of my gifts, yesterday. One was electric hair clippers with a small oil can (rancid?) for keeping it working. Carl would have me trim his hair and beard instead of paying a pro. That was over 40 years ago. I didn’t like doing it then, being afraid that I would hurt him or make a major mistake. Now beards are back in style.

Two men's jackets (one a golfing windbreaker, the other a really lovely casual jacket)...I'm over the sentiment now. Two women's clingy bike shirts. Clingy - that's never worked for me. Practically brand new! Be DONE with you!

The rest of yesterday's load went to the library for their book sale. Those bags were super heavy. Plus last year's Sunset and Metropolis mags will now bring more people more joy now.

I will be donating more books, and posters/wall prints once I pull them out of their tubes/portfolios. They aren’t doing anybody any good sitting on the bookshelves, unread or hiding in the blackness of those containers.

I think the only one who takes notice of this whole exercise is me. And that’s exactly how it should be.