This past Saturday was a day of grossness. After at least two months with an empty rat trap in my sub area...I suddenly started smelling something... not good. My handyman had put it there for me. I wanted the stench to be in front of my eyes... but no...it wasn't there. Stench was somewhere behind the retaining wall.

I opened the solid wood slider doors that lead to a portion of the mechanical system, i.e. the basement furnaces.  Behind those I was looking for the trap. ugh. I couldn't find it. It must have fallen off the interior retaining wall, in the dirt behind. I slid the doors closed and thought about it.

I thought about my friend, Ellen. She figured out how to put a build a complete, vintage, classic car together, from scratch! And then she drove it to auto shows where she showed it! What would she do.... 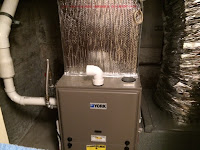 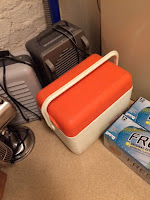 I realized I couldn't get a ladder into the closet...too many pipes, tubes, and gas connections to thread myself over and under.  There must be something I can use. And there it was, in the adjacent laundry room... an oversized lunch box.

I kicked it into place..but it felt a bit weak when I put one foot on it. What to do? Aha! Turn it upside down and it would be strong enough for me to stand on. I re-kicked the upside down lunch box into place.

I did my best (and shortest) army crawl, carrying my flashlight under my armpit, under the PVC pipes, and was able to stand on the box.....and the smell got...intense. I hoisted myself up, click on my flashlight. Right in front of me, in the dirt, was a dead (huge) rat...in the trap. Chills and double ugh.

I crawled back to where I came from. I found a strong, large, solid (not see-through) heavy-duty plastic bag, in a drawer near the kitchen sink, upstairs.  That should work. I went back in, folding the plastic bag so I could grab the rat with one hand, without touching it, steadying myself with the other hand on the retaining wall, and standing on the lunch box. I tightened the bag so the dead rat couldn't escape, and backed myself out.

Keeping my calm aura about me...I marched myself up the stairs, wondering if I should put the beast into the green bin or the gray bin? Gray won...it was closer.

At least the rat wasn't under the house..and the stench wasn't drifting out through the cold-air intake.
What to do? I started spraying lime-scented bathroom spray into the cold-air intake, and around the foyer. It was starting to smell lime-aid fresh (mostly). I did that several times while waiting for the garbage heroes to arrive today.

Last night I rolled the bin to the curb...and the stench was still there because the rat was still there. But it was on the curb, waiting for the morning when the bins would be emptied.

This afternoon, I decided to spend the water (we are still in a drought condition) to wash base of the the bin out, once I had poured in Comet (stain and disinfectant) and Whip-pit (the rug stain remover from Bed Bath & Beyond). It briefly crossed my mind that there may be a chemical reaction...but I immediately dismissed that possibility. And I left the bin open to let the sunshine in.