Skip to main content
July 15, 2016
I was digging out of our carriage house. Well, not really digging out. It was just dusty, dirty. Okay, we can call it filthy.

Over the years Carl used it as a shop for creating all of his wood-work artifacts: boat pieces, half models, boats (Evan and Carl built a 12? hour canoe and it's still hanging from the roof beams), half models, and more.

Carl's dad, Dick, taught him that a garage was a shop. His dad built small home-built planes in their 2-car garage. My dad (also named Dick) said it was a house for cars and bicycles, and a few tools, just in case (although none of the tools were used, as I recall).

So we've never had a garage for cars, unless my VW bug was getting an engine change-out. The carriage house gave Carl the perfect home for his hobbies. In fact, nobody could ever get any car into the building. No access. Carl was in heaven. That alone made the carriage house better than any of the garages he'd ever known. A reason to purchase the place.

We had talked about updating the carriage house...but then he passed on. During the 14 years since he's moved on to other garages (with his dad?), I've made some dramatic (i.e. emptying), changes. 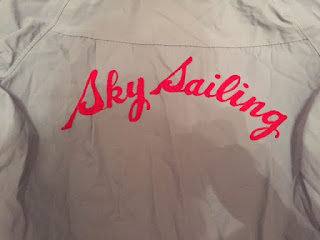 At one point I had somebody take the older,standing large tools, cleared out the chests of drawers (which were jammed packed), and took the rest to recycling or tossed it. Actually tossing was not a real option...I found folks who would find a place to sell the remnant tools, fittings, and fixtures.

So the other day, I thought I would move some of the 'stuff' that my fly-boys (those guys that I flew with over the years) had brought over as artifacts that they didn't want to keep at their own homes. They were sure that I really wanted them. Uh, no. But I took them.

It's been at least 3-4 years since we had our last reunion: those of us who met, learned to fly, worked, taught, and flew all kinds of planes at Sky Sailing. And what was left behind in my backyard, found a home in the carriage house, and had not been moved.  Until yesterday.

Bad news. Some of the books (artifacts) and photos appeared to be fine, but were covered in bugs (yuck!). Hey bugs, stay away from my bike!

Good news. I have a large artist's portfolio packed with artifacts that seems to be fine. Even the clothes with the Sky Sailing logo may have survived. I just need to wash them. And I found my own, as well as Carl's logbooks! That's real history.

What I do remember all those years ago, is that Bud Murphy, who bought the airport from Les Arnold, who started Sky Sailing, used to see me sweeping up the pilot's lounge. The "lounge" was a portion of the hangar, where Barry, the mechanic worked.

In those days I used to bring Sutter to the airport with me. She had loads of friends, all of whom worked there. I was a clean freak regarding the lounge...but could never make it the way I wanted. I'd sweep and sweep the dirt out, and Bud would stand there and say..."Merlyn, they're only going to track the dirt back in." Who could argue with that?

My next call is to the National Soaring Museum to see if they want some 'stuff.'