-I was riding my bike this week and saw a guy with his phone in his sock! He let me take a photo of it. Can you imagine...back in the day...putting a phone in your sock? Folks would think you were crazy. 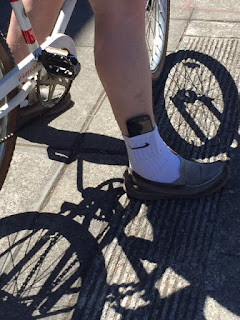 -When you sneeze or cough...you put your face into your sleeve. I guess people don't want to shake hands with somebody who has sneezed into his hand/handkerchief/tissue. But I don't know what happens if you don't have a sleeve to sneeze into.

-Pets are treated like humans, maybe better than humans. I get this one too, even though I don't have any pets. We used to have a cat..years ago. Scupper went into pet heaven.

-Smile...you're on Candid Camera. That was a TV program in the olden days. There are very few places when you are NOT in range of an active camera. So show those pearly whites.

-Speaking of pearly whites...flossing your teeth...seems to be out theses days. I just heard that yesterday on NPR. But I still do it. At least once per day, in courtesy to the folks I'm talking to.

-I know it's cool to go to major events (like concerts and sporting events). But I'd rather sit in my den and watch that event like football, basketball, sailing (as in the America's Cup) on my TV. I can put the TV on pause, get something to eat (and not pay a fortune for it), or head to the bathroom, or even go to something that's not as crowded and record the event..so I miss the commercials. The camera angles the experts use are so good these days! I guess the one event that you don't want to miss the commercials, is the Super Bowl.

-Speaking of TV's, my son and my tech guy want to me to get a larger screen. I told the tech guy to let me know if he sees a good deal...but really, my den is so small! Once again, I don't want to be in the TV, I just want to watch the TV.

-I've started going to our little theatre again, the Altarena Playhouse, in our town. It's intimate, and there's parking nearby..or I can even ride my bike there. They prefer a "sold out" crowd, don't care about what you wear, and my friend had her first published play there! That's what got me going again. Will be going later this month to see a David and Amy Sedaris show, The Book of Liz.

-When necessary I'll go to our City Council meetings. However, the local cable provider shoots those meetings. However, I have been known to get on my bike and head over to the meeting when I find I need to let them know how and why I feel about any subject. The joys of living on an island, anchored off the coast of Oakland.

-I'll be heading over to meet up with some friends to watch the Opening Ceremony of the 2016 Olympic Games. That's a big event....and she has a big screen. We will surely be cheering the folks on..as well as critiquing their outfits. But athletes being so fit...they can wear anything (or nothing) and still look GREAT!

Oh the days....too many changes. But change is inevitable, so we may as well embrace it.