I'm writing to you on my for-fun blog. I know you are doing well. That's the only way I can even think on these things.

The last couple of weeks I've had the privilege of being the recipient of lovely comments about you and the boats you designed.

The first event was in honor of a couple's 50th anniversary. Steve and Susan have owned and loved several of your boats over the years. Sutter has raced with them to Oahu on the Pacific Cup. Now they have sold Surprise but things are going well for them and the community they continue to live in.

They have created a foundation that builds charter schools for Richmond kids...and they bring all of their talents to build those schools. Two have been completed and there are at least two more in the works. Sutter, (when she came in from New Zealand for her annual visit to attend her church association meeting), and I were honored to see the schools in person. We had dinner with the Chamberlin's in their lovely home.

At the Oakland Museum, where the anniversary party was held, I was seated next to Stan Honey (who you always said was the smartest person you knew). Sally Lindsey and I had a lovely time to talk, as well. They are just the opposite of what you and Chris Corlett used to say about some of the racers we knew: "Professional sailors, amateur human beings." Truly, everybody at the celebration was a professional human being.

I was amazed at how many people I knew there, but I didn't always recognized them (that's why I always re-introduce myself upon saying "hi!"). I wish more people did that...I was constantly asking Ralf and Deb who that person was I had been talking with. Thank goodness they were at the party!

Some of those folks used to race Lasers with you, or Fireballs with us, or race Mercury boats with us. You used to say you needed to ooch the Mercury through the water, they needed a very gentle touch....trying to get it to tack or jibe. You always liked the classics, didn't you? 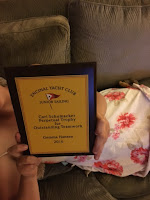 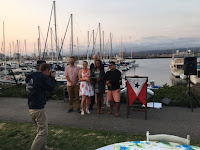 This evening I received a text on my phone from John Hansen. He wanted me to know that his and Clare's daughter, Gemma, received the Encinal Yacht Club award for Best Teamwork in their junior program. And it was named after you! I don't recall this award at all. But I thought it was a very appropriate award with a very appropriate name!

Here's what he wrote: Hi Marilyn, I just had to tell you that Gemma won The Carl Schumacher Award for Teamwork tonight at EYC. Seeing her win an award named for Carl made us so happy! Hope you're having a good summer. John

My response: Congrats! I didn't even know EYC had an award named after Carl! Teamwork will take Gemma a long way throughout life! Please let her know how happy I am for her!

His response: That's funny! You should stop by the club and check it out. It's a nice glass trophy! You can kind of make it out in this photo.

Well, I've written many letters to you in my head..and I'm not sure that you've been able to see them, read them, or even know about them. Maybe this will be in vain, as well. But it can't hurt to try it.

BTW...Speaking of classics...I'm one of 'em these days. Kind of like a classic car but without wheels. My wheels are attached to my bike and my almost-2-year old Toyota Corolla.