November 03, 2016
I love that parents bring their kids to Alameda...joining with those that call it home. It's flat, easily accessible, the houses are close together, and it's considered safe. The rain gods cooperated, with just a very few sprinkles. 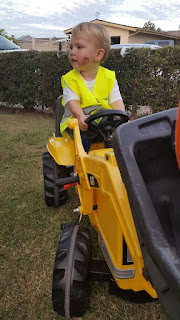 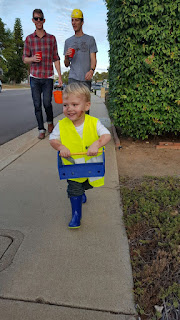 A gang of gals who looked like middle-schoolers, commented on my porch and the (non-Halloween) decor the porch had on it. That's kind of amazing...they look beyond their noses!

If you come to my house on Halloween I'll either give you a treat because you are wearing a costume, or I'll give you a trick...if you aren't. And once you perform the trick, you'll get candy.

And the kids were so polite! Not pushy like our presidential candidates. I think it might be wise to give the candidates excessive amounts of candy...to they shut up and slump into a candy coma.

I sit on my front porch during the Halloween event, with the candy in one of my cloth grocery bags, by my side. And of course the smallest ones do what they are told, not having a clue of why they are out wandering in the darkness. I won't give them any candy, if they won't say the magic words...'Trick or Treat.' Even if they can barely say it, they'll get the goods. And most always they say 'Thank You.'

But my favorite was Cadel...heading out into the sunset, as a contruction guy. And those kids were given Play-doh, and band-aids, and hot rod cars (what's with all that?). But the best was when Cadel went to the door, and found the candy was left outside, Erin said that he'd take just 1 piece and still say thank you.

Made me smile big in my heart.