Reaching out to the masses. 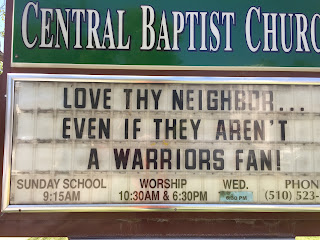 I ride my bike by several local churches several times during any given week. Our town has lots of places of worship. I ride on Central Ave because it has bike lanes, isn't too crowded with vehicles, runs the length of our island (from east to west), when it's hot, it's a shady street during those sun-drenched days...and because our first apartment was on Central. But I love the church signs that people can see either coming or going, and these change regularly. I can think of two churches that speak to the people through their signs, both on Central Avenue. If you are basketball fan, you are watching the playoffs. And if you live in N.CA you could very well be a Golden State Warriors fan. My son is an extreme fan..no, he hasn't died his hair gold or blue. Yes, he has the requisite shirts, balls, etc. And now Evan and Erin's son (nearly 2 years old), is becoming a basketball fan. And thanks to a dear, dear family friend, Jan, who took him to Warriors games
Post a Comment
Read more
More posts