February 09, 2017
I can often tell what the weather is doing outside, by the sounds I hear inside. 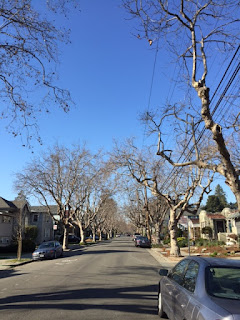 For the last few weeks we've had more rain days than sun days. Many of us say the drought is over...but I'm not so sure. It will take years to know if that is true or not. And I suppose the drought is the new normal..until it isn't. After all, CA is an arid climate. And I know I've changed my own personal water habits.

A few years ago, I started adding locations to my phone to know what the weather was 'doing' at whatever time it was.

Tonight is a wonderful example:

Christchurch (NZ) 62 degrees and cloudy (they are ahead of us 1 day, minus 3 hrs. at this time of year and oh, it's also summer there.)

Kaanapali, Maui 70 degrees and half-moony (they are behind us 2 hours)

Princeville, Kauai 63 degrees and half-moony (they are behind us 2 hours...but it's really rainy there)

Newport Beach CA 57 degrees, cloudy (Carl's and my hometown, and where I go to chill-out from work)

San Diego CA  57 degrees, cloudy. Son Evan and daughter-in-law Erin live there with their 2 kids, Cadel 2.5 years, and Claire, not even 1 month old!

Napa CA 56 degrees and almost raining. This is where Erin was raised and has a large extended family there.

Sacramento CA 55 degrees, about to rain

San Francisco, CA 56 degrees, cloudy  It's attributed to Mark Twain (aka Samuel Clemins) that he said the 'The coldest winter I ever spent was a summer in San Francisco." Apparently he did not say it. See the Anchor Brewing Blog article here but whoever did say it, was telling the truth!

And to top it off...and to make me feel really good regardless of the weather I'm in:
Prudhoe Bay, Alaska -30 yep, minus 30 degrees, and mostly cloudy.

I hear that our local weather this evening may be shifting. The Oakland International Airport planes have been taking off and landing to the west. It's been a few minutes...and I think their flight pattern is about to be to the east (as in inclement weather).

I haven't heard the SFO planes flying over our small Alameda island for a while, either. But I think that's about to change as well...landing to the south.

I'm kind of amazed at what keeps me amused. Oh well.