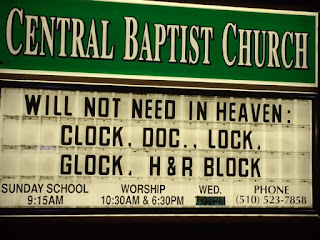 Here's another winner (of the month) from the gal who does the signs for Central Baptist Church. I'd love to meet her! And she makes it all so timely!

I couldn't figure out what the Glock was, and as I riding by on my bike, I said the sentence out loud. Oh yeah. A Glock is a gun. Well, you can leave that outside of heaven's door.

Since taxes were due this past Tuesday, the IRS occupied a small space in my head. But I solved that by getting my tax professional to file for an extension. No H&R Block upstairs, just down here on earth!

Speaking of taxes, last year the IRS sent me a refund check for a (big to me) sum of money. I had it tacked up on my bulletin board...waiting to see what the next communication might be from the folks at that national entity. It would be a bummer to cash that check and then have them say that I owed it back to them.

But somehow it fell from the bulletin board...and I have yet to figure out where it ended up. But it wasn't anywhere inside or outside of my office. Once I let the IRS know that I had lost it, it took them six letters (one every 45 days), to let me know that they were working on it. Again. Again. Again, Again. Again. Again.

Then the IRS told me they were auditing another tax return from me. My tax pro asked if they sent me a letter about it...and NO they did not. Ugh. He said they should have. UGH.

And guess what showed up on April 18th, tax day this year (due to April 15 being on a Saturday, and the Washington D.C. Emancipation Day holiday being observed on April 17 instead of April 16, taxes were due on April 18)? Yep, both of my refunds, without any interest on those amounts.

Emanicpation Day (signed into law on April 16, 1862, by President Abraham Lincoln) gave freedom to slaves in Washington, D.C. Maybe we could have freedom from our tax code, today.