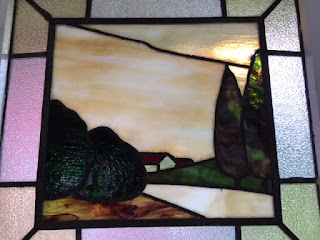 I saw this window while I was previewing a house today.
There were two of the windows (twins), and both of them were simply gorgeous!

But in my business, as a real estate broker, I often watch and hear what clearing out the stuff out does to and for my friends and clients. One of my friends/clients surprised me when she recenttly wrote that she liked seeing the walls in her house! I've said it before...have space, will fill.

It was kind of an unwritten rule for the Schumacher family...no cars in the garage. Homemade planes and boats were just fine..but no cars. This worked for us, because we couldn't get a car into the backyard, much less inside the carriage house. Carl considered it his man-cave. And though it was rather rough, he built beautiful half-models of boats designed by others, or designed by him.

I've cleared out 'stuff' probably every 3-5 years, since he's passed on. And he's been gone for 15 years. A contractor friend, helped me by installing metal (formerly kitchen) cabinets some time after he died. At least the cabinets collected dust on the outside, but the items inside were 'relatively' clean.

Yesterday, I realized that I didn't need the stuff anymore, I was quite surprised when some of my friends and my vendors (also my friends) came over yesterday, for various reasons. They actually left with stuff that they could use!

-The family who cleans my house took some dolls, an antique doll bed, some stuffed animals (recently washed and dried) for the grandkids, and some (current and antique) tools.

-The vendor that works/maintains my furnaces, discovered the furnace was working. I began to pay him but he had seen some very small cars on my (unused) sewing table. He suggested that we could make a trade. Then told me he had 100's of small antique cars! Done!

-I called my computer guy, Kyle, in a panic and left him a message. He called me back within minutes. He ran through a couple of scenarios. He had one last trick that he could do over the phone. Sure enough! It worked! No charge!

-Lastly, I called the Oakland Museum and the man who coordinates the truck called me back - twice! We made arrangements to have the truck pick up the stuff for the annual White Elephant Sale (each January/Feb), I'm getting rid of my flat-tire bike trailer...he said there would be a demand for that. And the antique tools. And my doll stuff/collections.