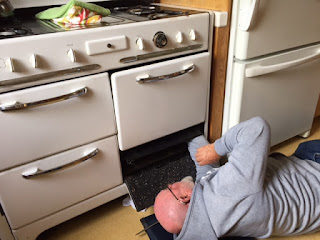 Most folks don't remember Calgon. It's a bath/bathing product. It was featured in a many decades long advertising campaign.

On Monday my antique oven (vintage, they say) wouldn't stay lighted (or is it 'lit'?). Not a bad thing..but I couldn't cook. Also not a bad thing. Often I have salads for dinner so that was fine.

Now please realize that although I've had it repaired, I've not had it ripped apart and put back together as a 'new' vintage stove.

But I wanted to make a big dish...Chicken Marbella. It needs to marinate for at least 12 hours, and then you can cook up a storm, once it hits the oven. The scent goes all over the house...yum!

So I had a vintage guy come out and work his miracles on my vintage stove. A friend (and old house owner) referred him to me. And Greg made it work, once again. Chicken Marbella will marinate overnight! And then bake away! 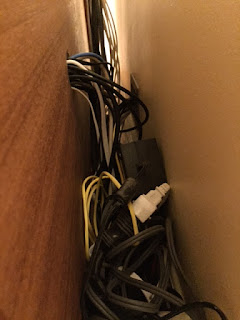 On Tuesday my flat screen TVdecided to give up the ghost. It wouldn't turn on. It had worked perfect the night before! OK. I could figure that out. Uh, no.

The photo shows the scrambled-egg wires and cables behind the console. No way, I told myself. So I called the local folks who installed it, and they sent Pete out today.

Like most every device we have, all I needed to do was to unplug the power from the box, let it sit for 10 seconds, and then plug it in.  There is no way that I want to mess with those cables, wires, etc, plus I had no idea where the power plug was.

I had Pete show me where it was. Then sent him on his way..and then I placed a sticky label on the power cord so I could see exactly where it was.

Now I know for the next time (and there is always a next time), what to do.

BTW...can you even get Calgon these days? Just thinkin ahead.