May 26, 2017
Follow me on my local (Alameda) real estate blog!  MarilynSchumacher.com

I was laying in bed the other morning, not thinking too much about anything. Then I looked at my closet shelves and realized that there were several hats wrapped up in plastic bags. They've been there for years, and years, and yes, more years.

So tonight I took them down from the shelves and opened up the history, filled with dust and memories.

My favorites are the ones that Carl wore. 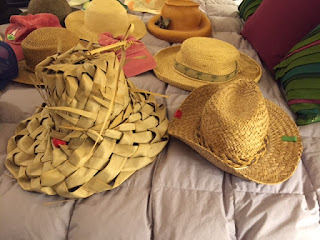 *One came from the wall downstairs, where it's been hanging because it was too big for the shelves.

The hand-woven 'pineapple' hat has a mini-bird that sways in the wind. We got this in Oahu after finishing the Transpac race...I think the boat (one of his designs, an Express 37) tied for 3rd place in our division.

Me and my five best boyfriends made up the crew. Took us 11.5 days from LA Harbor to Honolulu. These were experienced guys having lots of Transpac races between them. Me...I was the novice. But I never got seasick on that boat.

As we surfed through the channel, towards the finish line, the boat seemed so still, but very steady and quick. The boat almost planed over the swells.

Even though we got in at 1am, our group was greeted by the folks who were assigned to us. It was lovely! We we got to the hotel, we crashed in our bed. When I woke up in the middle of the night, I was literally bouncing from wall to wall, I was so used to being on the Express. 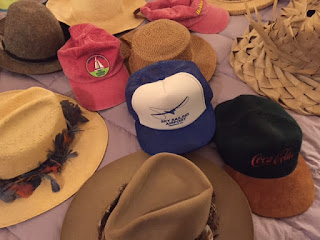 *The other hat that Carl wore was the straw hat with the tape that showed the left and right side of the hat. Green was for starboard, red was for port.

*The western hat (on the far left) with the feather band is one that I took to Alaska, when co-piloting the DC4s. Carl got the brown hat. I think we got them in Chico where the planes were based. If you didn't have a cowboy hat in Kenai, you weren't worth the fish you were hauling.

*There were other baseball type caps: A good friend, a Swede name Bengt gave Carl the hat that says The Wind is Free. The Sky Sailing hat is part of days gone by...no more gliders in Fremont.

*And then there were the hats that I wore once I got into real estate. At one time we had a hat party with the gals that worked at our office. The hats that we wore were hand-made by one of women at my church, who was a milliner. Pearl was a lovely woman and we gave most of her hats to a theatre group. I think I bought these hats, because Pearl's were much more ornate. They seem brand new. 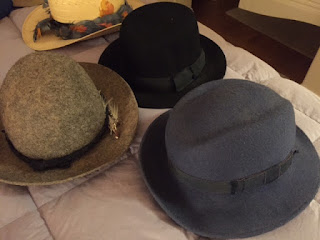 These days I only wear visors, and my bike helmet. I guess they are both some type of hat.

Every person has a story to tell. Every hat has a head to tell its story.