What can't be seen, can't be cleaned.

July 14, 2017
Back in the day when we had family cleaning time on Sunday evenings...things got done quickly, efficiently, and everybody knew what to do. Now it's just me. And I tend to clean when I don't want to do something else that seems worse.

UNTIL...I just get the urge to clean stuff that is maybe not disgusting but it's at least gross. (Maybe gross is worse than disgusting?)

When I choose to see the baseboards behind the beds, I tend to look away. They are so dusty and hard to get to! What can't be seen can't be cleaned. Same thing with the highest shelves in my closet. Can't see the dirt, it doesn't exist.

And so it was just yesterday, that it occurred to me that my toilet bowl brush holder had not been cleaned in ....years? ugh.  It came with a partner, known as the plumber's friend...a plunger. The plunger hadn't been used in a while. 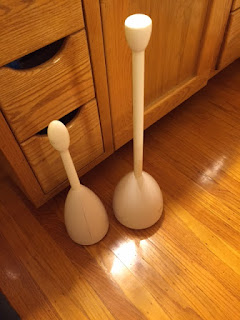 How would I do this? I'm still on a 'save water' lifestyle, though the local water district has released us from the limits that it had imposed upon us. But then the other night on the news, I heard that our rates would be going up 20% due to the massive need for capital improvements throughout our water system.

Hey, I've been praying and paying for water for a long time...and now that a few dams have been broken due to lack of maintenance and extreme storms, they're telling us this? If we ran our personal lives like the government runs its financial lives, we'd be dead by now.

Back to my small job of cleaning the toilet brush container.  It was kind of dusty on the outside. I didn't want to buy a new container...so I pulled out some tall, deep plastic 'tupperware' type containers. And I put the tea kettle on the stove and fired up the gas.

I was about to get an old toothbrush (I keep several of them as scrubbers in case I have some hard-to-clean areas), but the hot water was working its magic. I left the housing in the container in my kitchen sink...and left the house.

When I came back the toilet bowl housing was immaculate. Without the boiling water, I was able to clean the housing for the plunger, as well. A perfect set, the two items are.