August 24, 2017
Follow me on my Alameda Real Estate blog...marilynschumacher.com

I don't always pay attention to current events. I don't do Twitter, don't feed my Facebook pages too often. I guess I'm rather anti-social. No, anti-social media. Who has the time? Well, I guess our President does. I think he takes his cell phone to bed with him.

I knew there was an eclipse. I knew our town would be in the path of it...only 75% of the sun obscured. Not the "Totality."

Sunday evening I decided I needed to get some eclipse glasses. Every store said "Really? NO!" Besides, I was quite sure we would be fogged-in, because that's what we do during the summers...get fogged in, and then we get un-fogged by about noon. Being an island in San Francisco Bay, we've learned to live with the fog. It beats the heat just a few miles inland!

The internet told me where I could go...but the internet couldn't guarantee 2 things:
1. That I could get the proper glasses.
2. That I wouldn't miss the whole shebang due to sitting in traffic.

That last item was a deal killer for me. I just wouldn't sit in traffic. 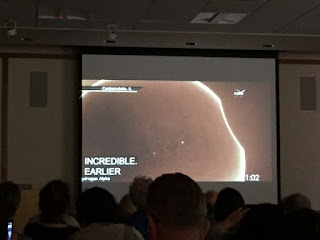 But the internet said that our public library would hold an eclipse viewing. Count me in!

I rode my bike over to the library about 9:15 am. In their large room, off the courtyard, there were filled chairs and the eclipse was about to be on the big screen! There may have been 80-120 viewers there...of all ages. It was fun just watching the viewers watch the sun.

We could see the bite being taken by the moon (on the photo to the left). 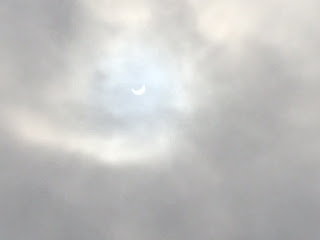 I decided to head outside to the courtyard. It was a bit crowded and it was rather scientific. Everyone had their glasses on (but me). And it was still foggy. I was next to a woman and her middle-school aged daughter. I had my
iphone out but wasn't sure what to do with it.

She told me to turn my back to the sun, turn my phone off, and hold the phone (with the black screen) up to the sun.  OMG! The eclipse was sharp and true! We were watching it happen because the screen was reflecting the sun on our the blank screens! 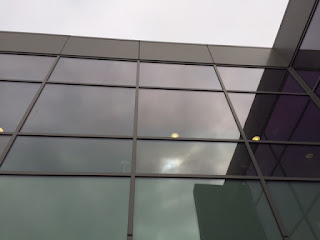 Then we realized that the bank of windows lining the library also had the reflection of the eclipse on it. Not as sharp as our phones but still it was there. I asked her how she figured this out and if she was a teacher...no, she wasn't...but I thought she was a hero!

After about 15 minutes, I decided to ride my bike home. But across the street, many of the folks in City Hall were still watching the remains of the eclipse.

I knew some of the people there and I hollered to my friend Debbie. "Come here! I'll show you how to watch the event on your phone!" Even though they didn't get to see the whole eclipse, she started telling everybody to pay attention to what I was saying. Phones starting coming out of pockets, backs were turned to the sun...and all was well.

That's my story and I'm stickin' to it.