Have space...stuff it, store it, ignore it. 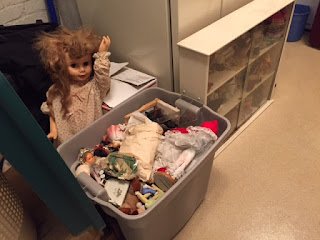 When I had some recent water intrusion, everything in those areas was pulled out from where the 'stuff' was hidden, and placed into living space.  But reality checked in. And I'm checking out. Why do I have this, or that, or what was I thinking? I'm giving all the stuff to a local museum to sell. They make $$ and I am over it.    This is just part of what was under the stairs.  Here's an example: About three weeks ago. I was parking my bike in the carriage house (a type of garage, but a car can't get into it...due to the yard. And the carriage house probably housed a car once those were invented. Before that, it probably was home to ...a carriage!) It was a far cry from the single car garage that we used to have. The carriage house was used as Carl's shop. He built beautiful boat/yachts half models in there, and he had his dad's big tools in there: a drill press, a table sander, table saw, and things I don't even remember. I gave his l
Post a Comment
Read more
More posts