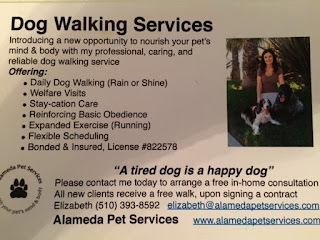 Follow me on my real estate blog....it's about Alameda, all of the time! Mostly. MarilynSchumacher.com I was at a friend's house the other day. When his front door was open, his dog escaped. He calls him 'the escape artist.' His pet, though small, is mighty. We tried to coax him back inside but he would have nothing to do with us. He was free! I asked if Seamus knew how to get home. He was on the loose! He said Seamus knows the way. Okay. We were talking for over an hour, and still no Seamus. I was determined not to be worried and was confident that he would return. Then the phone rang. No, it was not Seamus on the other end of the line. I wish! A woman had found him running along a busy street. She pulled over and had the magic touch. She happened to have dog treats and she happened to be a Professional Dog Walker! She called the local animal hospital and because the dog had a microchip implanted under his skin, the scanner told them where Seamus lived. B
Post a Comment
Read more
More posts