I've been busy clearing out my STUFF...still!  It's rather amazing what comes out of a box or a stack of paper.

This past week I found the quotes, below, that I had posted on my bulletin board but later I had tossed into a box.

These quotes are from Metropolis Magazine and I cut them out from the January, 2005 issue. They are attributed to Charles and Ray Eames. This magazine is full of the newest ideas/items found in architecture/furniture/materials and more, that designers/creators/makers come up with.

If you aren't familiar with the Eames, you'll learn about them from their official website.(Ray was Charles wife and for the longest time I thought they were brothers)  My bad.

My husband, Carl, didn't know the Eames...but he lived his life the same way: based on quality. He was a yacht/boat designer and bought/created quality. My daughter and son and their spouses also purchase quality. Me? not always so much. But I'm starting to take 'buy quality' seriously, because it just lasts longer, is better and more classic, and yes I pay more.

I added the letter S in front of  'He's', to be politically correct these days. 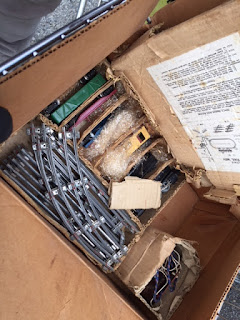 "We are moving into a period when the only things worthwhile coveting - the 'new covetables' - will be the mastering of certain concepts or ideas. And the beauty of this is that the coin of the realm is real. It means involvement on the part of the person that's getting it. (S)He's  got it, all (s)he has to do is give of her/himself." Charles Eames.

The recognition and understanding of the need was the primary condition of the creative act.  When people feel they had to express themselves for originality for its own sake, that tends not to be creativity. Only when you get into the problem and the problem becomes clear, can creativity take over." Charles Eames.

I donated some HO trains and tracks that are perfectly good (in my estimation), to the Oakland Museum for their Annual White Elephant Sale. But they're old and dated, and have wires that aren't safe, and need adults who will care for them and be creative with them. And that's exactly the comments that I got from the volunteers! I think they've been in the back of a closet for decades, and that they probably came from Carl's mom's house.

I feel good about whoever will purchase those trains. And I feel good for the Oakland Museum that the money they may receive will be put to good use.