Tick in the night.

But the other night I was a bit restless. And when I was still, I heard this noise. Oh my gosh.

It was a slight sound and then I realized there was a pattern to it. I counted what I thought was 41 seconds and it would tick. omg!

Was it a mouse, or mice, or rats under the floor? Was it a nocturnal animal, outside? Was it a baby animal looking for its mom? Was it termites chewing up my house?

This clearly brought back memories from last year. I got up to pee in the middle of the night and there was a mouse scattering across the floor. I tried to chase it out of the house, but it went into a void near the dishwasher. OMG!

And of course, there was the rat trap I set in the basement, behind the utility doors, on a concrete wall about 5 feet high. This little exercise was generated by the guy who looked after my furnaces, once per year. Now Rudy is retired! No rat. This went on for weeks. 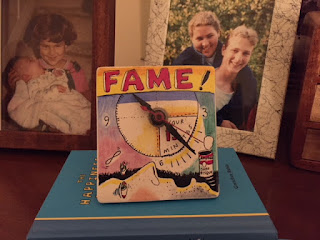 Then I smelled a rat. I really did smell a rat and the trap wasn't anywhere. Maybe it fell on the dirt side of the wall. And maybe the rat was trapped (because of the smell). So I got out the step ladder, wrapped my hand with a big black plastic bag, and felt around the dirt.  O M G!  I got the rat, the trap, threw it into the bag and ran outside and tossed it into the garbage.

Which brings me back to this week. I couldn't figure out a pattern, except for the 41 seconds between the tick. The only other pattern was that I could hear it at night.

I do a pretty good job of ignoring what I don't want to know. And then this morning, after my daily reading, I heard it. I was quiet. And the timing was 41 seconds. I looked around. And I discovered what it was!

It was my battery-powered clock. And the second hand would make a sweep every 60 seconds, and each time it grazed the minute hand. My count was a bit off, it was actually every 60 seconds.

Good news here! I gently bent the second hand so it wouldn't touch anything. And I have my peace, once again. No ticks, no mice, no rats, no termites. Well, I can't be sure of the termites, but I don't see any evidence of them....for now.

Thank goodness I'm not writing about ticks that get under your skin.
(Cute kids, dontcha think?)


Here's the link to my local real estate blog.... The Second Story