April 06, 2018
I was reading an article last week about a college student who signed up for a class she thought she might do ok in. Turns out it was far beyond what she anticipated.

Hey, I've been there before! What was it way back when? It took a few moments, and there I was: a senior in high school, in Mr. Taylor's chemistry class.

It was my senior year. Lots going on. President of the Pep Squad. Cheerleading. Painting posters for all of the teams. No, not just for the football and basketball teams, but for the swim team, the water polo team, the track team, the cross country team. I'm not sure that we cheered for the wrestling team but I think we did...a team was a team and we were team of cheerleaders and song-girls.

This was the first year anybody had cheered for all of the 'other' teams..and they sure did appreciate it. It was magical. We felt sky-high, because we were doing the right thing. Every 'body' counted: good or not-so-good. 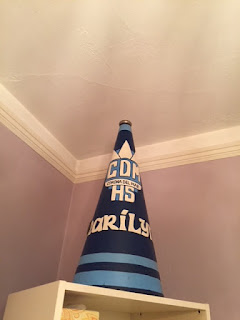 I know it made a difference for how Cliff Hooper (the art teacher and water polo coach) treated us girls. He was typically a walking grouch.  He never had much to say...even during my art class. When he realized that we were present at his matches/meets, consistently, he actually smiled at us.

Which brings me back to Mr. Taylor, the science teacher. 1st quarter...an A. 2nd quarter a B. Third quarter a C. Fourth quarter...I was about to see a D on my report card. I never had a D, and C's only a couple of times over the years.

Time to be creative. After school, I went to his class/lab. He was there. I was nearly crying. There was no way I could bring that grade up. I finally said, "I promise you that I will never take another science/chemistry class again...if you will give me a C in your class." I'm sure I looked pathetic. But he agreed to give me a C. And I kept my promise.

Thinking back, (and I know I wrote about this a few years ago)...I was the kid-sitter, my 3 younger brothers needed a boss-woman. We each were told to write down our differences so our parents could see them.

We each had lists that seemed to be a mile long. We negotiated just before our parents came home.  Quickly we scratched items off the list. By the time our folks showed up...all was well...no lists, no nothing.

I think one of the reasons I've loved being a real estate broker/agent for all these years..is that I like helping people who want their issues (real estate related) to come to logical conclusions but can't seem to find a way to do it.

So thank you bros, and thank you Coach Hooper, and to Mr. Taylor. Couldn't have gone this far without you.