I never know how many will show up. Good news, it's been quite calm in the 'hood. Bad news...what if nobody shows up? argh!

Way back in the day, my son, Evan, and his best friend, who were in 4th? grade and were riding their bikes home from school (and believe me, he will correct me when I'm wrong, or else my daughter Sutter will), and they were held up at gunpoint (nobody knows if the gun was real or not, but that didn't even matter) by some 'kids.'

When I got home, there were 3(?) police cars outside of our house...and the cops were interviewing the kids in the living room. Bottom line...they didn't catch the hoodlums and I think they found their bikes, somewhere. Maybe not.

I couldn't stand around and do nothing! I typed up what happened and hand-delivered the letter to all the neighbors within 2 blocks, the next day. Did they see anything unusual? Did something seem not right? That's not the way I would prefer to meet the neighbors. But that's what I did. 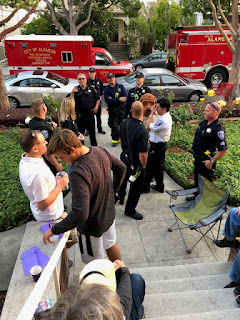 Bottom line....with the police officers help, we had a meeting at my house, in the living/dining room, setting up a Neighborhood Watch. I'm more than willing to give up my 'captain-ship to anybody else who wants it. But nobody has stepped forward.

Those kids now have kids of their own, and better bikes, as well.

I'm not the best hostess/entertainer, but I ordered cake at Costco (they do a great job with everything that they bake), got some cold bottles of water out, my friend brought over fresh figs from her parents tree (Alameda-grown), and I put out a big bowl of cherries that were given to me by the best house-cleaners EVER (thanks, Monroe and Bernice) straight from the Farmer's Market.

I cleaned up the front porch, got some chairs out of the car trunk, and others chairs from the carriage house. And I waited....but not too long!

Neighbors started walking over from all directions, including those who I didn't know! And then the cops came over and then the fire people, and they stayed around for some time. 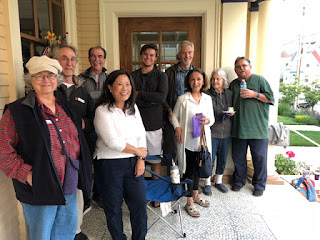 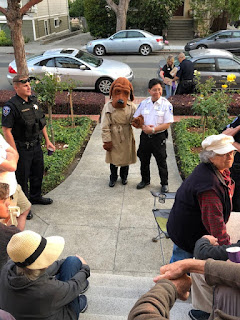 If this is what having good neighbors is about...I'd do it each month. But everybody has their own lives. Yet taking the time to just jaw around is kinda priceless.

And then the 'hood was quiet.

check out my Alameda real estate blog.... The Second Story