October 26, 2018
check out my real estate blog The Second Story

The second meeting of the Oakland Speaker Series was a very good one. James Comey was the speaker..and he was terrific. And tall! He says he's 5'10"! He was the main event. And he was most inspirational, to me.

Then as we walked back to my car...everything seemed normal. We had parked on the street in front of the restaurant where we share Chinese dishes before we head over to the Paramount Theatre. We felt the street would be a safe space.

Uh, no it was not. The vent window in the backseat on the passenger side was smashed in. We taped a plastic bag around the hole and drove home. I was almost crying.

As I dropped my friend off at her house, I was wondering how I could get it fixed. Oh, and by the way...I needed to get up early because I was taking another friend to a meeting in Santa Cruz the next day. And I was picking her up at 7:30am. 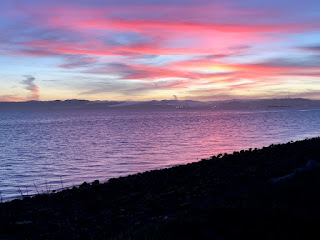 I prepped my bags that night  The next morning I got up at 6am, put on 'casual business' attire (whatever that means). Then I got a small shop vac out and sucked up the glass.

And yes, I put on a makeshift window, comprised of a 1-gallon plastic baggie and about 1/4 roll of blue tape, inside and outside of the car. Gosh, had it only been a month since I did this before? argh! This is not how I wanted to start the day.

After 2 hours in horrible traffic, we made the last dash to the conference in about 45 minutes. Not a good thing. But at least we were there. (Note to self...we need to stop driving our cars with only one person in each car.)

The meetings were terrific: the attendees were involved, and the collaboration events were wonderful. (I think I may buy 200 dominoes for my next event and see what we can come up with for a design to celebrate that event.)

I believe we were allowed 1 hour to plan and execute the domino-design, make the corrections, stoppers, and line up the curves. We also needed to take a video on a cell phone as the first domino was tapped over to see what happened.

We left Santa Cruz at about noon, went home to A-town in record time - no traffic.

I called the insurance company, and they made an appointment with Windows on the Move for today.  One of the guys that worked there said "welcome back!" We both laughed. About 30 minutes later the CADEAU was ready to go.