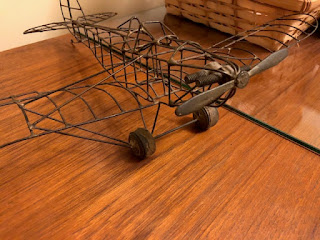 Earlier this year, I was once again dumping/trashing out 'stuff' that I had no need for. Those high cabinets on top of built-in closets in my office, hide the most boring stuff, until it's not.  Daughter Sutter, response was "Don't do that!" Well, I'm here and she lives in New Zealand with her Kiwi husband, Sean. Uh, yes I will! Some of those 'items' were old photography equipment: movie cameras, a slide viewer, actual movies (on reels) that Carl's dad made when racing in Transpac events from LA to Honolulu. Sure, they're the real deal, but I don't know anybody who's on those boats. And based on my experience with the Soaring Museum in New York...the Transpac folks don't want any more stuff to stuff into their coffers. Actually, I never had the privilege of meeting Carl's dad, Dick, who was a Western Air Line's pilot. He was fondly known as Schuey. He and four others were killed in a Western Air Line crash, which w
Post a Comment
Read more
More posts