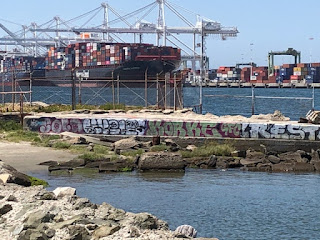 This past week I needed to get my daughter, Sutter, to the Alameda ferry. Once she boarded that, then it would stop @ the San Francisco city front, and she'd board the ferry to Tiburon, where she'd meet some lovely people who she came to know (and love) through my late husband's yacht design business. They had at least two of his designs over the years, and now they have just one boat/yacht that Carl designed for them.

She seemed to be running late...(rather strange because I'm the one who runs late and she has no problem telling me that). She hustled down the gangway...but other folks were also doing the same thing...so she was safe.

I decided to do some reading, in my car, and parked the car, maybe an eighth of a mile west of the ferry. I was there for over 3 hours.

The container ships were loading and off-loading. It was non-stop. The cranes were going non-stop. The ferry was heading over to SF. A large sailboat was doing practice runs up and down the estuary. A man and his dog were playing catch. Huge dump trucks were going in and out of a gated area, loaded with toxic dirt? A couple of older kids were listening to a machine, doing punk-rock moves nearby.

The noise of those containers, crashing around made me think..."I wonder what's inside, and will it be smashed to bits once it gets to its destination? For that matter, where would the ship be going?"

I was listening to the noise..and I suddenly realized, that I'd been up in one of those cranes....decades ago! This had to be long before 2001, because since then no visitors would be allowed in that huge working shipping yard.

I think one of my glider-flying students, worked or had connections around those cranes. And I was able to bring several students/friends/and my husband with me on a field trip. I remember that I took the opportunity to drive that crane (without a container).

Most of those friends I've lost contact with or have passed on.

It's the quiet times, in the midst of chaos, that these things come to me. Someday, I may even open up my logbooks to see if I recognize the name of that person...

...but not quite yet...that would be going too far back and I'm choosing to live in the present.

Now I have tears streaming down my face. I have so much to be grateful for and about.