Back in the day, people were astounded when I hopped out of an airplane or sailplane.

This week I was fortunate enough to watch several tugboats pull, turn, and push around 2 huge container ships, in Alameda's estuary turning basin.

I was totally fascinated.

What's the horsepower of those engines?

Evan, our son, had a friend whose dad was a ship's captain. I didn't want to ask the man about his job. But I knew that he was gone a lot.

One of these days, I'll get out our (ship to shore) marine radio, and listen in on those conversations between the tugs and the ships. I think that radio is on the workshop bench in our carriage house. 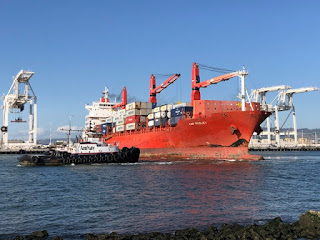 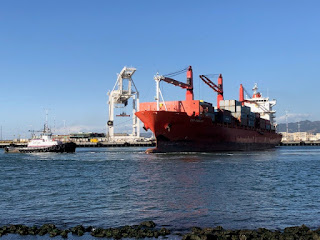 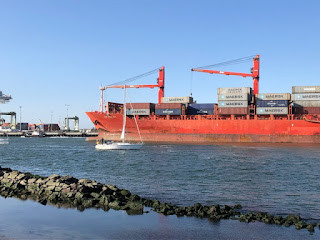 Backpack on the rack.

I couldn't find my backpack anywhere, last night, and I looked everywhere; in drawers, behind furniture, in the laundry room, in my closet, blah blah blah.

I wanted to get to our Wednesday evening church meeting by 7:30pm. And at 6pm it was pretty dark.

I needed to decide if riding my bike or driving there would be best (or worst).

I have a lighted helmet with a turn indicator built into it, a bike light that flashes quickly or slowly, is bright or a bit dimmer to light up the dark night, my reflective gloves, and my orange Patagonia jacket. I look more like a Christmas tree than a bike rider. But still no personal ID.


If I drove, I'd still have no I.D. but I'd have my most current driver's registration, which showed up in the mail this week. I drove....very cautiously.

I know exactly where I went during the day...to a meeting at City Hall, 3rd floor, room 360. It was a very informative meeting and our Building Official let our lead Planner take over the meeting.

-Life isn't easy, but I'd rather leave this earth having done something of value to and for people, than bask in riches and in ease, that, in the long run, doesn't matter to me or anybody else. No DO-OVERS! Take me up the next flight of stairs...

-at my desk and suddenly my printer starts warming itself up...noises, the full works. wha' up w/ dat? not the first time, and always irregular.

-really, a robocall polling about football?

Mean-ness - get over it. Why not take a big step and ask 'an enemy' (or so it seems), out for a beverage or breakfast or brunch. Put the phones down and shut them off....and look face to face. In my dreams....

I was attending a class today, but I was the only student that showed up. I knew the (woman) instructor and so we started talking about the real estate program that she would teach. I wanted to be sure I was taking advantage of most of the program's functions. She asked me how I got into real estate. And I told her.
That discussion lead me to this...a re-run of my initial introduction to flying.

Splice: to join two ropes by intertwining the strands.

"Marilyn, I have something for you.  My dad wanted you to have it.  See you back at the house." This was from Bud Murphy's son, Rich.

Hmmm.  Wonder what that could be.

There are two men who have framed my life.  The first was my late husband, Carl.  The second was Bud Murphy.  The first inadvertently introduced me to the second.  And now they are both gone.  Carl, in 2002, and Bud in 2011.

Within a year of getting married, Carl decided that we must be extravagant with the $40 per month he got from a five and a half year st…
Read more