This week, 4 of us attended The Oakland Speaker Series. Some of us have attended this for decades? Daughter, Sutter, started this, and Carl and I decided to buy season tickets and I've been attending ever since (unless I give my ticket to one of the group because I'm not able to attend or choose not to listen to the speaker).

Last year I had the small car window (aka vent window) smashed in while we were listening to the speaker at the Paramount Theatre. And the next month I parked in a lot, and it happened again. Good news, my insurance covered the window...both times, with no deductible.

Blue tape is part of my 'Realtor' tool kit, and I drove to Santa Cruz with a friend, with that window being blue-taped together, in order to attend a Leadership Training for the next two days.

Back to yesterday....three of our group of four, (I was not consulted), came up with an idea. We'd drive to the loft-space of one of the others. We would park the car, and call for a Lyft. 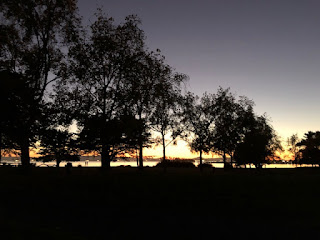 For some reason, the Lyft driver was always 6 minutes away and we were waiting for over 15 minutes. We dumped that driver. We finally were picked up (all four of us) by another Lyft driver. Good.

Well, maybe not so much. He didn't speak any English, at all. I was one of the three squished into the back seat.  The passenger in the front was trying to tell him how to go, and at the same time, we watched him play/drive 'dodge the traffic' under the freeway, along the side roads, paying attention to his phone/ map, and getting yelled at by the woman in the front seat.

Good news. We arrived at the restaurant, and it was pretty good. We walked 1/2 block to the theatre and heard a conversation with the host, Jim Weil, and our guests Donna Braziel and Michael Steele (both political experts, Donna is on the left of the spectrum and Michael is on the right). They gave their points of view regarding the election...and they were so honest and funny (in times that are not always so honest and funny).

Getting back to the loft... yep...this Lyft driver was great. She spoke English and she knew where she was going. Upshot...I got home.